Directed by George Miller
A triumphant, playful, and deeply spiritual animation classic by the Australian genius behind Babe.

In the great nation of Emperor Penguins in Antarctica, community is all important. You have to know how to huddle together against the cold, or march to the sea to catch fish for the family. During mating season, the male and female penguins are attracted to each other by their "Heartsongs." Every penguin has a song that is his or her distinctive identity. It's the "voice you hear inside" that makes you "who you truly are."

When Norma Jean (voiced by Nicole Kidman) and Memphis (Hugh Jackman) meet, he is attracted to her wiggle and her soulful singing. She loves his self-confidence and Elvis-like crooning. When Norma Jean heads off to the sea with the other females, Memphis, unfortunately, has a minor mishap with their egg. When it is time for their chick to be born, he takes longer than the others to crack out of his egg. Baby Gloria tries to help and is there to witness his strange behavior. The baby penguin, named Mumble, can't seem to keep his feet still. He jumps all over on the icy ground. Instead of being proud of his new son, Memphis is bothered by his "happy feet." He says: "It just ain't penguin." Others see it too, and as the months pass, the whole community decides that Mumble (Elijah Wood) is an oddball. Worse still, he can't sing at all, and, as the saying goes, "a penguin without a Heartsong is not a penguin at all."

Norma Jean and Memphis send him to a voice teacher, but all she can get out of him is an unappealing screech. Off by himself, where he can let his happy feet tap dance across the ice, Mumble meets Boss Skua (Anthony LaPaglia), head of a gang of menacing birds who want to make lunch of him. The penguin gets him to tell the story of being abducted by aliens who poked and probed him and then put a yellow thing around his leg. Mumble escapes from them but keeps this strange news to himself.

Soon it is time for the young penguins to go to the sea for their first catch. Mumble is actually the first one in the water, which turns out to harbor some dangerous creatures and too few fish. He demonstrates his love for Gloria by catching a fish for her and fighting off some greedy birds to keep it. That night, under the stars, she leads a concert and he tries to sing along, much to the consternation of all the others. Soon after, he sets off alone.

Wandering the icy wastelands, he meets the Adelie Amigos, a group of five happy-go-lucky Latino penguins who find his moves "so accidentally cool." Ramon (Robin Williams), the most outspoken one, even calls Mumble charismatic. The Emperor Penguin at last has found friends who respect him and his dancing feet. They come up with a plan to help him win Gloria's heart. But back home, Noah (Hugo Weaving), one of the elders, condemns Mumble's dancing and blames him for the loss of fish in the sea. He bans the young penguin from the community. Mumble vows to find out the true reason for the fish scarcity.

The Adelies tell Mumble about a guru penguin called Lovelace (Robin Williams) who answers all questions. He asks him about alien abductions, but his response about mystic beings on a forbidden shore doesn't make much sense. This quirky character has a plastic six-pack ring around his neck that is slowly strangling him. Deciding this strange thing may be a clue, Mumble, the Adelies, and Lovelace set off to the place where he found it, a quest that will test their resilience and camaraderie.

George Miller, who co-wrote, produced and directed Happy Feet brings the same creativity, exuberance, and spiritual élan to this animated feature as he did to Babe. He has incorporated so many imaginative elements into the story that it boggles the mind. First, there is the exciting music, which includes rock, funk, opera, rap, liturgical, pop, gospel, and Latin. The music is composed by John Powell, and the soundtrack also includes songs performed by Prince, Yolanda Adams, Fantasia Barrino, Gia Farrell, Chrissie Hynde, Patti LaBelle, k.d. lang, Jason Mraz, and Pink. Second, there is the glorious dancing by the penguins. These scenes have been choreographed by Warren Coleman who brings together many styles including Zulu, gumboot, Navajo, and Samoa slap dancing.

The music and the dance bring out the yearning we've all had to move the body in sync with the rhythms of the earth. The grand finale of Mumble's quest brings him into an encounter with the world of humans and a connection that justifies all his struggles to remain faithful to his true self. The ecological crisis captured in the story of the disappearing fish is finally addressed with an inspiring message that couldn't be more timely: We have so much more in common with the whole Creation than we know, and our survival — and theirs — depends upon our celebrating that deep truth.

Special DVD features include two new fully animated sequences: "Mumble Meets a Blue Whale" and "A Happy Feet Moment"; a private dance lesson with Savion Glover; two music videos: Gia's "Hit Me Up" and Prince's "The Song of the Heart"; and a classic cartoon: "I Love to Singa." 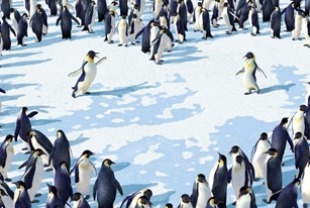 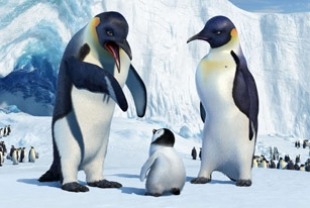 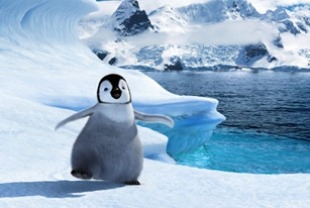 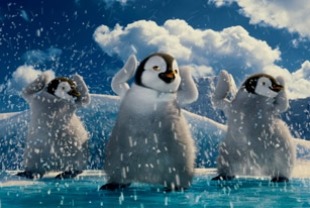 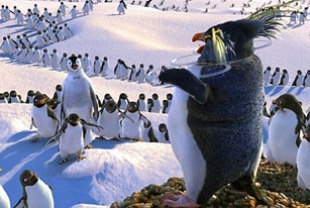