Directed by Alfonso Cuaron
A portrait of a future society that spotlights the issues we need to be addressing today.

"The world has collapsed; only Britain soldiers on," says the announcement on the screen in a piece about nationalism in England in the year 2027. The country is under martial law. Muslim terrorists are planting bombs in public places, and all foreigners are suspects, ridiculed as "fugees." An underground organization known as the Fish is working for the rights of illegal immigrants, who have been rounded up and put in pens. The city streets are filled with garbage, and buildings destroyed by bombs have not been rebuilt.

In the opening scene, Theo Faron (Clive Owen), joins a group in a London café listening to an announcement that 18-year-old Diego Ricardo, the youngest person in the world, has been murdered in Latin America. Women all over the world have not been able to give birth since a flu epidemic in 2009. No one knows the reason for this infertility although a group of scientists in The Human Project are trying to figure it out.

Shortly after Theo leaves, the café is blown up by a terrorist bomb. No wonder this disillusioned idealist, who works in one of the government departments, now carries a bottle of booze and a pack of cigarettes with him everywhere he goes. Shaken by yet another close encounter with death, he decides to visit Jasper (Michael Caine), his one-and-only friend who lives in splendid isolation with his wheelchair-bound wife and their animals in a forest. They smoke some pot, tell a few jokes, and listen to folk music from the past.

Back in London, Theo is kidnapped by the Fish and taken to their leader, who turns out to be Julian Taylor (Julianne Moore). She was his lover 20 years ago when they were activists together, but they split up shortly after the death of their child. Now Julian wants him to get transit papers for Kee (Clare-Hope Ashitey), a young black illegal immigrant they are trying to smuggle out of the country. He is to get the documents by paying a wealthy relative, who appears to be completely untouched by the carnage on the streets and has Picasso's Guernica hanging in his dining room.

Children of Men is directed by Mexican director Alfonso Cuaron who did such a smashing job with Harry Potter and the Prisoner of Azkaban. This dark and gloomy sci fi film is based on a 1992 novel by P.D. James. Clive Owens comes across well as a former activist who still has within him some embers that can flash into flame. In his mission of mercy with Kee, he becomes a fierce nurturing male who is willing to do all it takes to protect her and the secret she carries — she is pregnant. If he can get her to The Human Project, the scientists there might be able to find a cure for the infertility. The violent journey through the countryside filled with paramilitary police and rampaging terrorists is a real test of Theo's resolve and creative daring.

Children of Men brings to mind two other dystopian dramas — 1984 and the screen adaptation of Margaret Atwood's novel The Handmaid's Tale. Like them, it uses a portrait of a future society to spotlight the issues we need to be addressing today. The rich are isolated and indifferent to the poor. The social fabric has broken down in this future world, making every place potentially dangerous. That Theo has so much trouble protecting a potential savior of the race only proves how self-interest has trumped the community good. Immigrants have become the scapegoats for all kinds of social ills. They are treated like vermin, kept in open air cages like wild animals, beaten or executed. Yet deep in the hearts of these immigrants, as in the hearts of the English citizens who hate them and the paramilitary police who torment them, is the same yearning: to see life continue and flourish. Watch for the scene at the end that points the way. 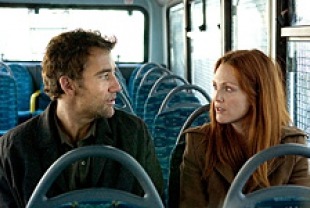 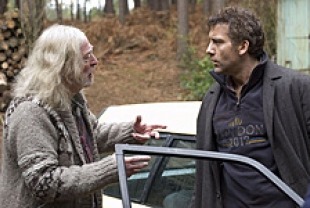 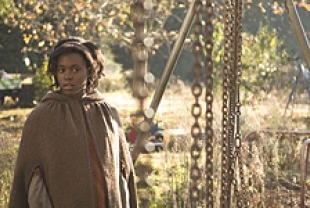 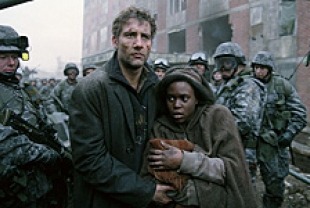