Curse of the Golden Flower

Zhang Yimou (House of Flying Daggers) takes us on a magic carpet ride back to China in the tenth century, to the splendor of the Later Tang Dynasty. The Emperor's palace is covered with gold. He and his family are attended by countless courtiers, maids, and eunuchs. They glide through life on a sea of privileges and are honored in ceremonies and rituals. No expense is spared to make them comfortable, and beauty is a constant companion.

But as Zhang Yimou points out in a statement about his third action film, there is an old Chinese saying, "God and Jade adorn the outside, but within all is dark and rotting." Beauty can be nothing more than a cover for the beast beneath.

In the visually splendid opening sequence, the Emperor (Chow Yun Fat) and his son, Prince Jai (Jay Chou), are returning to the palace for the upcoming Chong Yang Festival. The entire court prepares for an elaborate welcoming ceremony that never happens. The energy and attention to detail is extraordinary as the horsemen ride in formation, and the women line up to help each other dress and apply their makeup. The only one who seems to not be in a festive mood is the Empress (Gong Li). Her husband has prescribed some herbal medicine for her anemia, yet she seems to be getting weaker as the months go on.

The Empress is also distraught to learn that the Crown Prince, Wan (Liu Ye), the son of the Emperor and his late first wife, wants to leave the Imperial Palace and take up residence in a provincial capital. He has fallen in love with the Imperial Doctor's daughter (Li Man), and he wants to escape the guilt and pressure he feels for a three-year love affair with the Empress, who is lonely and neglected.

Other secrets are eating away at the solidarity of the royal family. The Empress learns from a mysterious woman (Chen Jin), whose face is branded, that the reason for her illness is that the Imperial Doctor (Ni Dahong), at the request of the Emperor, has added a black mushroom to her medicine that will eventually destroy her mental faculties. The Empress' response is to go down fighting: she puts into motion a plan of revenge to take place during the Chong Yang Festival, a celebration of family, ancestry, and escape from evil fortune. Golden chrysanthemums are the symbol of the festival.

The only one who sympathizes with the plight of the Empress is Prince Jai who vows to support her when he learns of the Emperor's cruel scheme. The youngest son, Prince Yu (Qin Junjie), stands in the shadow of his two brothers and feels ignored. No one has taken into account his feelings, and he turns out to be filled with anger. The violence that ensues as the royal family begins the Chong Yang celebration takes place with the swiftness of a natural disaster. Assassins in black and soldiers clash in a fury of swords and arrows. Thousands of yellow chrysanthemums are drenched in the blood of the combatants.

The aha! quality of Curse of the Golden Flower does not come with our emotional identification with any character but emanates instead from our respect for the staggering amount of time and creativity that has gone into the sets, costumes, and action sequences. Zhang Yimou proves himself to be the Busby Berkeley of our times with his sumptuous orchestration of this visually dazzling film.

Special DVD features include a behind-the-scenes featurette “Secrets Within” and the Los Angeles Premiere. 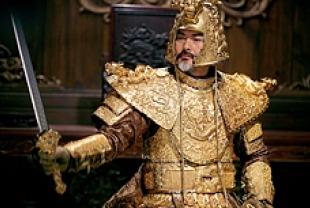 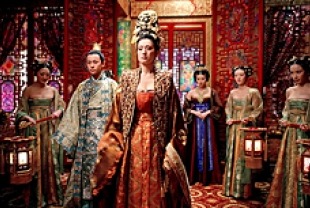 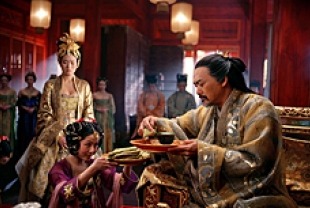 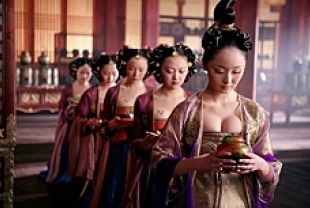 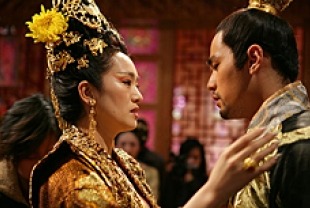 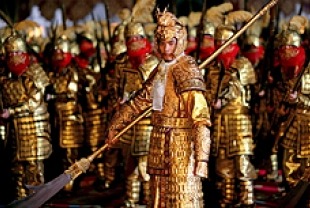 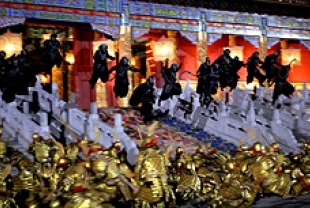 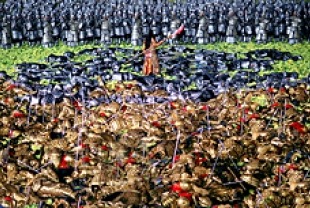 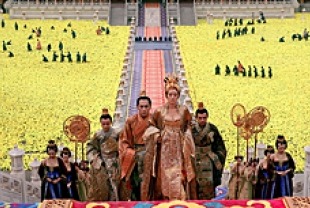