Directed by Lasse Hallstrom
A fast-moving and highly dramatic depiction of Clifford Irving's media hoax of 1971 as a sign of the moral rot at the heart of American culture.

An epidemic of cheating has invaded all segments of American society and is a sign of the moral rot at the heart of the culture: reporters have fabricated stories; major writers have been caught plagiarizing; corporate corruption is rampant; nearly half of all resumes contain lies; employee theft is widespread; students are cheating on tests and copying papers off the Internet; athletes are using illegal drugs to improve their performance; and tax evasion is widely practiced by the very rich. People rationalize the need to cheat or lie by saying that everyone else does it. This slippery slope leads to widespread dishonesty justified in the name of getting ahead or becoming a winner — two of the highest standards in our society.

Lasse Hallstrom (Cider House Rules, What's Eating Gilbert Grape) is at the helm of this outrageous story of a middle-aged writer whose obsession for fame, money, and power leads him to fabricate an autobiography of the reclusive billionaire tycoon Howard Hughes. Clifford Irving's book about the hoax he almost pulled off on the media and the public has been adapted for the screen by William Wheeler and it also includes a sly depiction of Nixon-era political corruption as well as a seamy look at the world of publishing.

Clifford Irving (Richard Gere) is an unhappy and unfulfilled middle-aged writer whose last work was a book called Fake about an art forger. His publisher at McGraw-Hill is Andrea Tate (Hope Davis) and she is very excited about a novel he has completed. But when the deal surprisingly is torpedoed, Irving becomes desperate and tells her he is writing "the book of the century." That gets her attention and startles his best friend and meticulous researcher Dick Suskind (Alfred Molina). With incredible audacity, Irving claims to have been in contact with the reclusive Howard Hughes and has letters from him proving that he has been designated as the one to write his memoirs. This is only the beginning gambit in a roller-coaster ride of lies and fabrications that compel Irving to constantly justify himself to Sheldon Fisher (Stanley Tucci), the president of McGraw-Hill and a slew of fact checkers and lawyers. The clever con man keeps upping the ante and eventually gets the publisher to pay out one million dollars.

Meanwhile, Irving and the increasingly nervous Suskind begin fabricating the autobiography using an unpublished manuscript they steal from Noah Dietrich (Eli Wallach), Howard Hughes' former CEO. The con man's lying nature also comes to the fore in troubles with his artistic wife Edith (Marcia Gay Harden) who has to expend a lot of her creative energies trying to reign in his hedonism. She is still upset with an affair he had with an European baroness Nina Van Pallandt (Julie Delpy). As the hoax gets increasingly complicated and dangerous, Suskind, stunned by his friend's dizzying selfishness, begins pulling away from him.

The final sequences in the movie reveal the unraveling of the scam, and we leave the theater to return to the latest news of lying and deceit and the latest takes on political and corporate malfeasance. The culture of avarice keeps on keeping on from one decade to the next. A footnote to the saga of Clifford Irving is right in sync with this: it appears that all is forgiven as he has returned to writing and made some more money off his new books and old adventures. 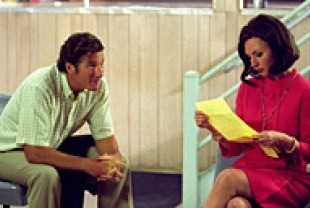 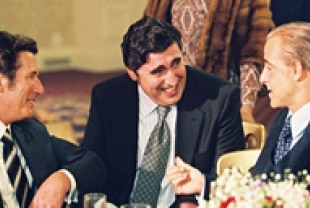 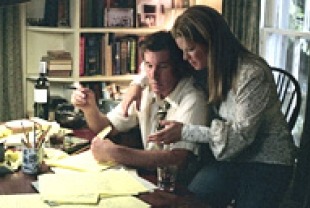