Directed by Volker Schlondorff
A cinematic tribute to a genuine working-class hero whose courage and zeal for justice fueled the Solidarity Movement in Poland.

Agnieszka (Katharina Thalbach) has been a welder at a shipyard in Gdansk since 1950. Whereas those who work around her try to do as little as possible, she excels at her work and wants to do a good job since ships carry people and can't have flaws caused by carelessness. As a result of this attitude, she has won many awards given by the shipyard. But Agnieszka is also the bane of management since she is never satisfied with the status quo. She sets up an improvised lunch service for the workers since they do not have enough time to make it to the commissary.

Her life is changed when she meets Kazimierz (Dominique Horwitz), a trombone playing worker in the shipyard who takes an immediate fancy to this petite woman who is raising her son Krystian on her own. When Agnieszka learns that she has cancer and will soon die, she decides to marry Kazimierz. He teaches her how to read so she can pass a test that will enable her to operate a crane at the shipyard. Just when her life is in turnaround, he dies of a heart attack. Agnieszka then is told by the doctors that the tumor in her body has mysteriously vanished. This devout Catholic believes God has a plan for her but she does not know what it entails. Part of it is encapsulated in a recurring dream she has; the other sign is that the new Pope is from Poland.

Volker Schlöndorff (The Tin Drum, Voyager) directs this political drama which he calls "a ballad based on historical events." The screenplay is by Andreas Pfluger and Sylke Rene Meyer. While some may quibble with the choices Schlöndorff has made of what to include and what to leave out of this biodrama, Agnieszka comes across as a genuine Polish folk hero whose stubborn sense of justice and work ethic are solid virtues that propelled her into a leadership role. When 21 workers die in a fire and the company refuses to pay their widows, Agnieszka moves into action and there are public protests. Management tries to bribe her and then silence her but she persists. After violence erupts in the streets, Agnieszka winds up in prison. In addition to these woes, her grown son (Wojciech Solarz) is enraged when he finds out that his father is Sobecki (Andrzej Grabowski), a shipyard administrator. Because of his mother's activities, he is denied acceptance into a university.

When Agnieszka is fired, a small band of men and women committed to achieving more pay and benefits for the shipyard laborers coalesces around her cause. Led by Mateusz (Krzysztof Kiersznowski), a massive strike is organized and the Solidarity movement is born. It is her zeal for justice that propels the workers to accelerate their demands and to not accept the concessions asked by those in power. 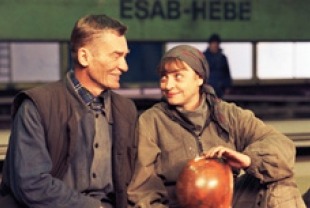 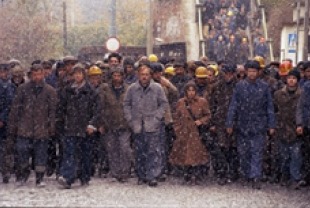 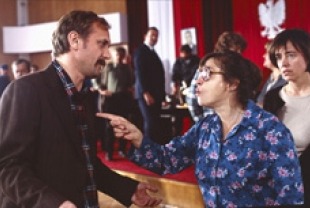