The Devil Came on Horseback

Directed by Annie Sundberg, Ricki Stern
A powerful and shattering documentary about the indifference of the world to genocide.

We are always moved by the scene in the John Sayles movie The Brother from Another Planet in which the Brother removes his eyeball and hands it to a drug lord who is oblivious to the chaos of the streets and all the suffering going on there. The eyeball is filled with the incidents of pain the interplanetary visitor has observed. In a vivid and convincing way, this scene demonstrates the ideal of giving someone your eyes so they can see and feel what you have seen and felt.

We thought of this scene after viewing The Devil Came on Horseback, one of the most searing and emotionally shattering documentaries ever made about the indifference of the world to genocide. The subject is what's happening in the Darfur region of Sudan. The filmmakers, Annie Sundberg and Ricki Stern, focus on the experiences of Brian Steidle, an American who after serving in the Marines took a position with the African Union as a neutral observer assigned to monitor a 2004 ceasefire in Sudan after a 20-year civil war. Raised in a military family and used to the resolution of problems with gunfire, Steidle was frustrated in his role armed only with a camera, a pen, and paper.

What he can do is photograph the dead bodies of men, women, and children who have been slaughtered by the Janjaweed (or "devil on a horse") militia. In conversations with some of them, Steidle learns that they have been armed and funded by the Arab-dominanted Sudanese government. They have been given a free-hand by the authorities to rape, and execute Darfur's black citizens, then pillage and burn their villages to the ground. Of course, Sudanese leaders deny that they are behind the genocide. And the world community takes no note of the role China plays in the region as it tries to protect its oil lines. Leaders in the West are even slow to designate what's happening as genocide since that would necessitate UN action.

Steidle and his team turn in some 80 reports to the African Union, but nothing happens. Back in the States, still sickened by what he has seen and shocked by the soullessness of the death squads, Steidle decides to wake up the West by sharing his photographs. He gives all his material to the New York Times reporter/columnist Nicholas Kristof who publishes many of them in a groundbreaking series entitled "The American Witness." Steidle testifies before Congress hoping that the U.S. government will do the right thing but nothing comes of it. He speaks at a large rally for the Save Darfur coalition in Washington, D.C., but is saddened by the lack of any concrete action by the United States or the United Nations. When he speaks at the Holocaust Museum, several members of the audience from Sudan dispute the factual nature of his photographs. Steidle realizes that they have been hired by officials in Khartoum to discredit him.

Transformed into a passionate activist, Steidle travels with his sister Gretchen to Darfur refugee camps in eastern Chad. There he interviews various survivors and learns about the desperate plight of those who have lost their homes and loved ones. One refugee does praise the citizens of the United Sates who have sent supplies and food for the camps. But on a visit to Rwanda, Steindle breaks down while traveling in a van and begins to weep. Little has changed since the world turned the other way when so many Rwandans were slaughtered ten years ago. And now it's just more of the same for the Africans in Darfur: 400,000 people have been killed since 2003 and 2.4 million have been displaced by the violence.

Like The Brother from Another Planet, Steindle has given his eye to others and yet many refuse to see or to open their hearts in compassion to the pain and suffering of the men, women and children of Darfur. If you are ready to respond, here are some concrete things you can do: 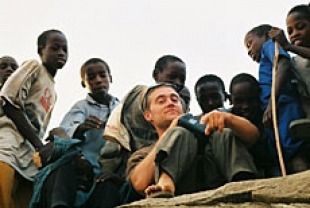 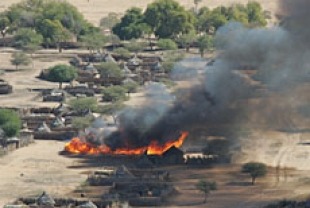 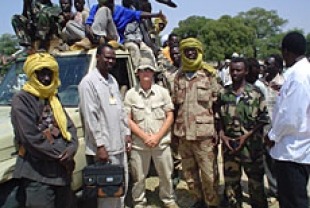