Directed by M. Night Shyamalan
This psychological thriller is about a boy who sees dead people and the therapist who helps him.

Many people claim to have communicated with those who have passed over to the other side. They will tell you that they have felt the presence of their deceased partner, friend, or family member. Others have experienced contact with the dead through dreams or objects they have left behind as sacraments of their love. These encounters are mysterious — defying both reason and explanation. But to those who have been blessed by them, they are real as rain and just as refreshing.

Sometimes, however, people need a little help dealing with such phenomena. And, as many of the world's religions acknowledge, there are things the living can do for the dead. These are the themes of The Sixth Sense, one of the most heart-affecting and profoundly provocative films of 1999. Writer and director M. Night Shyamalan (Wide Awake) has created an awesome drama about a young boy whose paranormal abilities have given him contact with the dead.

In Philadelphia, Dr. Malcolm Crowe (Bruce Willis), a child psychologist, is given a medal of commendation by the mayor for his professional excellence. That same night while he and his wife Anna (Olivia Williams) are celebrating, Vincent Gray (Donnie Wahlberg), a deranged former patient of his, breaks into his house and delivers an ominous message. Dr. Crowe then takes on the case of Cole Sear (Haley Joel Osment), a nine-year-old hyper-sensitive boy who seems to be suffering from visual hallucinations, paranoia, and schizophrenia. His loving mother Lynn (Toni Collette) is baffled by her son's unusual behavior. Eventually Cole tells Dr. Crowe that he sees ghosts and is terrified by them. Later, the boy learns that the dead have chosen him to help them deliver messages to those they love. This epiphany holds great meaning for Cole and the doctor.

This psychological thriller has vibrant emotional clout given the astonishing performances by Haley Joel Osment and Bruce Willis. Its spiritual meanings set it in a different league from Rosemary's Baby and other scary movies. What are we left with in the wake of The Sixth Sense? A feeling that the dead are with us in ways that we cannot understand; a hunch that there are people and treasured objects that can serve as channels between this world and the next; a realization that we should always honor the mystical and spiritual experiences of children; and a sense that it is very important that we share our encounters with the supernatural with those we love. 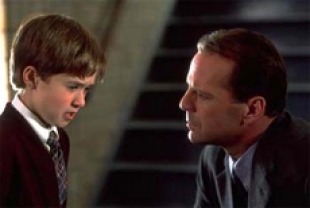