Directed by Joe Wright
A literary drama about the incredible damage caused by lying and the power of the imagination to amend reality.

It is a hot summer day in 1935 in rural England. Thirteen-year-old Briony Tallis (Saoirse Ronan) lives with her mother (Hariett Walter) and older sister Cecilia (Keira Knightley) on an exquisitely magnificent country estate. She is a very precocious girl who spends a great deal of time writing her own stories. She has had a crush on Robbie Turner (James McAvoy), the housekeeper's son. Once, to test his feelings for her, she plunged into a stream to see if he would dive in to save her. He did but was angry at her mad impulsiveness and didn't seem particularly loving.

Briony has just completed her first play which she hopes to perform for the family. Everyone is awaiting the arrival of her brother Leon (Patrick Kennedy) and his friend Paul (Benedict Cumberbatch), heir to a large chocolate company. But before Briony has a chance to take center stage with her play, she looks out the window and witnesses Cecilia strip down to her underwear and dive into a pond to retrieve something for Robbie, who stands in front of her. Briony is shocked by this outrageous and mysterious behavior by her sister.

Later that day, Robbie asks her to take a private note he has written to Cecilia; she opens it and is shocked by his use of a term referring to a part of the female anatomy that she knows is unspeakable. Later, Briony opens the door to the library and interrupts Robbie and Cecilia making love. She assumes he is assaulting her.

This series of exotic and erotic events turns Briony against Robbie, and she concocts a lie linking him to a crime of sexual assault committed that night against her cousin (Juno Temple). It will take many years before this fanciful young lady realizes the reverberations of her unethical deed. Robbie, who went to Cambridge with Cecilia thanks to money provided by her father, had hopes of becoming a doctor. But in prison, the only option he is given is to serve in the army as a private in World War II. Before shipping out, he meets with Cecilia convinced that their passionate encounter has faded from her memory. But she has left her family, taken a room in London, and become a nurse. She still loves him and promises to wait for him to return from the war. By 1940, Robbie, exhausted by the horrors of the war, and two companions join the rest of the retreating British Army at Dunkirk, where they hope to get ships to return home.

Meanwhile, Briony (Romola Garai), now 18, has become a nurse, hoping to do some good for wounded soldiers in atonement for her lie which has wrecked the lives of both her sister and Robbie. She is alone and adrift in the world but still writing away in the late hours of the night. Many years later, Briony (Vanessa Redgrave) is being interviewed about her 21st novel. It will be her last, as she is suffering from a terminal illness. In old age, as when she was a child, she clings to the power of imagination to provide the enchantment the real world cannot match. And now she sees another value of writing — as a way of making amends and correcting history.

Joe Wright (Pride & Prejudice) directs this expansive and beautifully edited film with its shifting timelines and rich ethical themes. The screenplay by Christopher Hampton is based on the 2001 novel by Ian McEwan. Atonement sets up the dilemma of the drama with such clarity and clout that the middle section dealing with Robbie's experiences during the war dilute the full impact of the tale. Nonetheless, it does come across as a poignant account of the great damage that lying can do. As Sa'di stated centuries ago: "To tell a falsehood is like the cut of a saber; for although the wound may heal, the scar of it will remain." 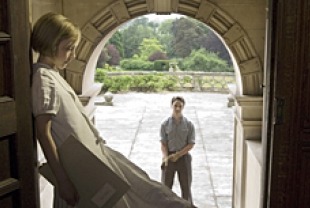 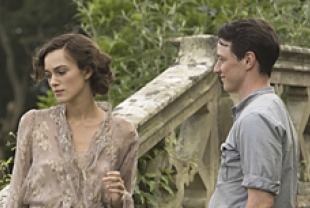 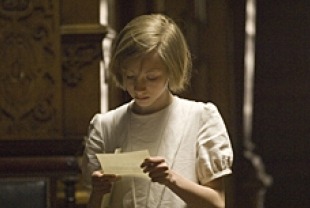 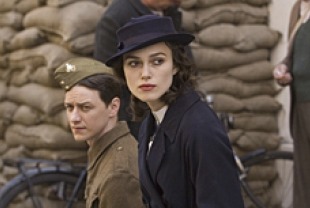 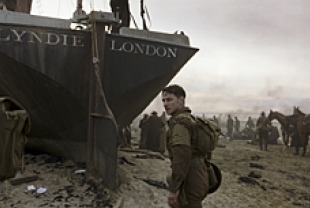