Directed by Sam Mendes
A brilliantly acted and inventive satire on the American dream.

The sly and tricky truth of this Zen parable is at the heart of American Beauty, winner of five 1999 Academy Awards including Best Picture. Lester Burnham (Best Actor Oscar-winner Kevin Spacey) is a 42-year-old underachiever who lives with his ambitious wife Carolyn (Annette Bening), a real-estate agent, and his alienated and angry teenage daughter Jane (Thora Birch). He is a disappointment and an embarrassment to them both. All his work at a magazine has come to nothing, he can't communicate with his daughter, and he hasn't had sex with his wife for ages.

Then, miraculously, the catalyst to Lester's transformation from a nearly dead sad sack to a liberated man who is not afraid to express his emotions comes in the form of Angela, a blonde teenage cheerleader (Mena Suvari). She stirs Lester's libido and sends his life into an overdrive of changes. At work, he turns the tables on the manager who is about to fire him and engineers a $60,000 payout package. At home, he starts working out with weights. He takes a menial job, gets a new car, and for the first time feels glad to be alive. He discovers that he now has time to savor the small beauties that he has missed.

On the surface, American Beauty is a brilliantly acted and inventive satire penned by Academy Award-winner Alan Ball and stylishly directed by Sam Mendes, also an Academy Award-winner. Like the 1999 film Election, it savages many of the widely accepted assumptions of the American Dream.

The filmmakers are highly critical of the uglification of so many departments of modern life — the blandness of suburbia with its worship of possessions, the silliness of dressing for success, the narcissism of shaping bodies into clean machines, the myth of the seductive blonde, the terrifying specter of homophobia parading as morality, and the desperate need of individuals to stand out and be seen as special.

On a much deeper level, this film presents us with a most unusual antihero who is a quiet and intense priest of beauty. Ricky (Wes Bentley) moves in next door to the Burnhams with his violent and authoritarian father Colonel Fitts (Chris Cooper) and his almost catatonic mother. This 18-year-old, who spent two years in a mental institution after his father caught him smoking pot, now deals drugs to finance his hobby of videotaping the world around him. He befriends Jane and draws out her inner beauty. He's determined to convince her that "It's hard to stay mad when there's so much beauty in the world."

In one of the film's most exquisite moments, Ricky shows Jane his favorite video of a white plastic bag dancing in the wind. The scene's simplicity and poignancy brings to mind Sister Wendy Beckett's observation: "The eye that sees nobility and beauty in what another would regard as ordinary is the eye of prayer." Yes, we are living in enchantment and yet we miss so much of it. Why? Perhaps because we're like Angela, who remarks, "I don't think there's anything worse than being ordinary."

With a little help from Ricky, Lester's final act of transformation is to become an acolyte of wonder. Gratitude resurrects him from death to life. It may take several viewings of American Beauty to mine all its spiritual riches. In the end, it might just help you reframe your understanding and appreciation of the beauty in the ordinary. 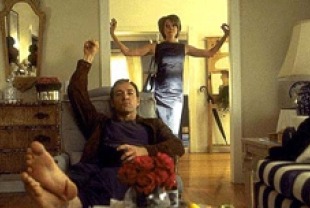