Encounters at the End of the World

Directed by Werner Herzog
A visually stunning documentary about the scientists, dreamers, adventurers, philosophers, and creatures of Antarctica.

The idiosyncratic German filmmaker Werner Herzog heads off to Antarctica to make a documentary and assures us at that he is not about to make "another film about penguins." But fate has its way with him (more about that later). At the outset, Herzog is stunned by the "seemingly endless void" of Antarctica with its vast spaces and silence. Arriving at the McMurdo research station, he describes it as looking like an ugly mining town. Herzog grows restless and criticizes the "abominations" of a yoga studio and an ATM.

He is puzzled by the kind of individuals who would volunteer to work in such a place at the end of the world. He finds some fascinating people to share their reasons for being there: a forklift operator and philosopher who speculates that Antarctica is for professional dreamers and adventurers; an oceanologist who loves the magic feeling of being adrift in the ocean on a gigantic iceberg; a journeyman plumber who claims to have come from Aztec ancestors; and a female researcher who loves being a vagabond and contorts her body into a small piece of luggage for a performance in the community's talent show. In the documentary's funniest scene, the newcomers are subjected to a two-day survival school where they learn how to build an igloo and work together to handle a whiteout storm.

At the research camp, Herzog meets Sam Bowser who will be taking his last dive under the ice in a long career. Some of the scientists who go underwater in search of facts about the evolution of the earth refer to their dive as going "down into the cathedral." We are introduced to a world of strange creatures and a landscape like the moon. One day a member of the team discovers three new species. It is at such moments that the film makes a good case for the spiritual practice of wonder. These scientists talk about the mysteries of the natural world and the animal kingdom with reverence. One can't help but be awed by the many strange and wonderful sights on the screen.

Although Herzog has no interest in going gaga over cute penguins, he is surprised when after talking to a nature researcher about their habits, a lone penguin wanders off on his own. This "deranged" penguin, as Herzog calls him, is bound to experience an icy death separated from the community. The filmmaker comments that many scientists in Antarctica don't hold out much hope for the survival of humankind. Like the lone penguin and Herzog himself, we all have to make our own way through the world.

Special DVD features include an audio commentary with director Werner Herzog, producer Henry Kaiser, and cinematographer Peter Zeitlinger, and an interview by Jonathan Demme with Werner Herzog. There are also several featurettes: "Under the Ice," "Over the Ice," "Dive Locker Interview: Werner Herzog Talks with Rob Robbins and Henry Kaiser," "South Pole Exorcism," and "Seals & Men." 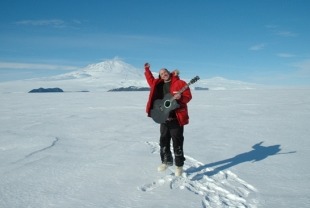