Directed by Sebastian Silva
A portrait of how an enthusiastic woman brings freshness and novelty into the life of a longtime maid who has sunk into exhaustion and depression.

Raquel (Catalina Saavedra) has been a live-in maid for the same household for more than 20 years. She has no contact with her own family and has adopted this one as her own. Mundo Valdes (Alejandro Goic) and his wife Pilar (Claudia Celedon) have a special affection for Raquel who flirts with their teenage son (Agustin Silva) and has been carrying on a private warfare with their daughter Camila (Andrea Garcia-Huidobro) for years. There are two younger boys as well. But Raquel is troubled by headaches and dizzy spells. When the Valdes family hosts a surprise birthday party for her, she is unresponsive and grumpy.

Things go awry when Pilar decides that at age 41, Raquel cannot handle all the work in the large house. She hires Mercedes (Mercedes Villanueva), a Peruvian au pair who is an immediate hit with the rest of the family. Threatened and angered by this intruder, Raquel begins a concerted campaign to get her fired. She succeeds, but then Pilar's mother recommends Sonia (Anita Reeves), a much older and tougher maid. Raquel pushes this woman too, and they wind up having a fight in which Mundo's model ship, which took him a year to construct, is smashed into pieces. Raquel collapses after Sonia's departure and then returns to the household to resume her work. Meanwhile, Pilar has hired Lucy (Mariana Loyola), an enthusiastic and self-confident young woman who blows into the Valdes home like a breeze of fresh air.

Chilean director Sebastian Silva has made an engrossing film that doesn't focus on class differences as much as on Raquel's blend of loneliness, anger, and jealousy. She fiercely clings to the Valdez family, which she calls "my family," and her fierce competition with the other maids draws out the worst in her. Everything is changed with the arrival of Lucy who is vitally alive. Her enthusiasm pumps zest and novelty into Raquel's life, showing how this spiritual practice gives added value to everything it touches. And to see it unfold in The Maid is to savor its miraculous powers.

Special features on the DVD include behind the scenes with the cast and crew; storyboarding The Maid; and photos from director Sebastián Silva. 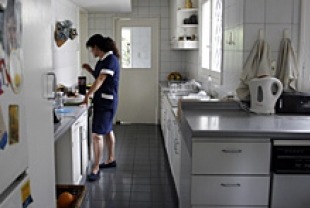