Directed by Anders Østergaard
A moving documentary about the courage of underground video journalists covering the 2007 protests in Burma.

Freedom is only a dream in the hearts and minds of the people of Burma who live under a repressive and violent military regime. In 1988, the government put down the first democracy movement through violence, and over 3,000 people died. Since then Burma has been closed to the outside world. Aung San Suu Kyi, the country's beloved activist, is also a Nobel Peace Laureate, the only one so honored who is under house arrest.

Anders Østergaard, a Danish filmmaker, has fashioned a riveting documentary charting the activities of The Democratic Voice of Burma (DVE), a collective of underground journalists (VJs) using handycams and cell phones to report what has been going on in this isolated country. It is a dangerous vocation: if they are caught they can go to prison for life. One of these courageous young men (no faces of DVE activists are ever shown) is named Jonathan. He laments the enslavement of his people and wonders whether they will ever be free of the oppression of the military regime. After filming a small protest, he seeks sanctuary in Thailand where he sets up a communication center for members of DVE.

On August 19, 2007, there were some demonstrations against high fuel costs. Then on August 28, several hundred Buddhist monks took to the streets in support of the protestors. "We want the people to join us," the nonviolent monks chant. "We want national reconciliation, we want freedom for Aung San Sun Kyi and other political prisoners." By September 18, the numbers of those in support of the monks and the demonstrators had swelled to tens of thousands of people. Those watching show their support by clapping and cheering or raising their hands in the air. In one of the most poignant moments in the documentary, the Buddhist monks pray aloud: "May we be completely free from all danger, may we be completely free from all grief, may we be completely free from poverty, may we have peace in heart and mind."

Watching Burma: VJ, we are deeply moved by the creativity and the courage of the DVE members who brought these images of protest and repression to the world. These pictures had been smuggled to Thailand and then sent to Oslo, Norway and broadcast via satellite. Equally impressive is the spiritual fire-power of the nonviolent protests of the Buddhist monks. As they marched through the streets of Rangoon, we remembered images of the religious and spiritual participants in the American civil rights movement. There is a deep spiritual meaning to the yearning of people to be free and this incredibly effective documentary carries that truth home to our hearts and our minds.

Special features on the DVD include an audio commentary with director Anders Østergaard and film critic John Anderson; "Fighting for Freedom": a video interview with exiled Burma JA "Joshua"; Burmese monks' stories from the uprisings televised by Democratic Voice of Burma; a video message from Richard Gere; and Crossing Midnight: a riveting film about refugees on the Thai/Burma border. 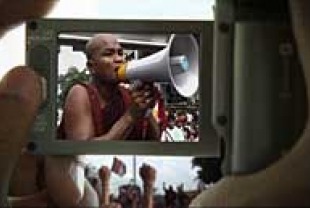