Directed by Pete Docter
A charming animated feature about a memorable cross-generation friendship that is also a probe on the true meaning of adventure.

Carl Fredrickson (voiced by Ed Asner) is a 78-year-old former balloon salesman who lives alone in his house. New construction is going on all around him, and he has been offered a lot of money to sell his property. But Carl is a stubborn man who enjoys his solitude and communion with his deceased wife Ellie. He fondly remembers her love of adventure and her dream of escaping to Paradise Falls in South America to live by a gigantic waterfall. Their mutual hero is explorer Charles Muntz (Christopher Plummer) whose fame was dealt a deadly blow when his skeleton of large and rare bird was declared to be fake. After marrying, Ellie and Carl try to have children but are unable to do so; she invests her soul in their dream but they never are able to fulfill it.

Faced with being forced to move to a retirement community, Carl comes up with an inventive plan that will enable him to put wings on the dream that animated his marriage. He ties hundreds of helium balloons to the house and soon he and his home are lifted up into the air and headed south. Only trouble is, there's a stowaway aboard: a pudgy eight-year-old named Russell (Jordan Nagai), a Junior Wilderness Explorer who had been trying to help Carl so he an earn his Assisting-the-Elderly merit badge. This would qualify him to achieve the rank of Senior Wilderness Explorer. So a cross-generational adventure is born as the curmudgeonly old man is paired with the enthusiastic and inquisitive young boy as they wing their way across the sky, eventually landing near Paradise Falls.

In the jungle, they encounter a large multi-colored bird which Russell names Kevin. This playful animal loves chocolate and the boy is immediately attracted to him. That nurturing feeling is well-founded since the legendary explorer Muntz is in the area bent on capturing the bird so he can use it to reclaim his reputation. He has set a pack of dogs on its trail. They all have electronic collars that enables them to express their thoughts. One of them, Dug (Bob Peterson), is very lovable and attaches himself to Russell and Carl.

At first, the balloon salesman is thrilled to meet the famous explorer but he is turned off when he discovers Muntz's paranoia and his sinister plans for Kevin. Now Carl has to decide whether he wants to rest in his house overlooking the splendid waterfall or help Russell rescue Kevin after he is captured.

Up is a very pleasurable 3-D animated movie directed by Pete Docter. Pixar has another winner with their tenth release. The screenplay by co-director Bob Peterson and Pete Docter beautifully conveys the unfolding of the friendship between the spunky boy and the cranky old man. In the course of their time together they draw out the best in each other. The most edifying lesson of all is given to Carl who realizes that the deepest and truest adventure in his life was not a trip to a faraway place but the joy of sharing his life and his dreams with Ellie. He also comes to see that he has plenty to offer Russell and others. Up is a delight to watch and experience from start to finish.

Special features on the DVD include a theatrical short: "Partly Cloudy"; the many endings of Muntz - alternate scenes; "Adventure is Out There - Travel to the real Paradise Falls"; an exclusive animated short film: "Dug's Special Mission" - all new short follows the misadventures of Dug. 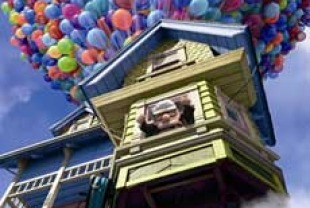 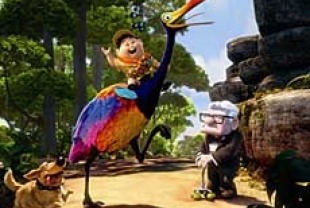