Directed by Martin Provost
An extraordinary French film about a deeply religious cleaning woman with a passion for creating luminous paintings.

Seraphine (Yolande Moreau) is an eccentric 48-year-old cleaning woman who lives alone in the small French village of Senlis. She meticulously does her work and then retreats to an apartment where she paints incredible pictures of flowers and plants having the same vibrancy as those of Vincent Van Gogh. Seraphine is a deeply religious Catholic who is convinced that a guardian angel is guiding and protecting her. She is enthralled by nature and can be transported into delight and gratitude in the presence of flowers. This child-like woman also loves trees whether hugging them, climbing them, or sitting peacefully under them.

Seraphine knows that her employer looks down on her. She has to take other small jobs just to pay for her painting supplies. When her boss learns that she paints, she demands to see one of her creations. Seraphine agrees, and the woman is unimpressed. She puts it aside in her living room.

Things change in Seraphine's life when German author and critic Wilhelm Uhde (Ulrich Tukur) arrives in town and hires Seraphine to clean for him. He is a connoisseur of new painters such as Braque and Picasso. He is also a champion of Art Brut — imaginative works by usually uneducated people who have a propensity for wild and primitive imagery and subject matter that seems to come from the soul. Many of these luminous paintings are filled with mystery and passion.

When Uhde visits her other employer and stumbles upon Seraphine's painting in the living room, he is astonished by her creativity and her unique art. Without hesitation, he offers his services as her patron and friend. She is pleased with this affirmation of her art. But then Uhde, frightened by what might happen to him in a country that hates Germans, decides to flee at the onset of World War I. She continues to paint, and he does not re-connect with her until the late 1920s when he gives her the money she needs to paint full time. Ultimately, her passion for art, isolation, and mental agitation gets the better of Seraphine and she winds up in a place she never expected to be.

Seraphine is written and directed by Martin Provost, and it is easy to see why this extraordinary film won seven Cesars (French Academy Awards). The filmmaker demonstrates a keen appreciation for an unusual artist's intense religious devotion ("My inspiration comes from above") and amazing discipline. He does a remarkable job depicting the many magical moments in the natural world which animate Seraphine's paintings. Best of all, the drama unfolds very slowly with many silences where nobody speaks, and we are mesmerized by the particular miracles of trees, plants, sun, and sky.

A wonderful musical score by Michael Galasso also adds beauty to the story's emotional textures. But the major triumph here is that of Yolande Moreau's astonishing depiction of the varied personalities of Seraphine as cleaning woman, religious devotee, and obsessive artist. 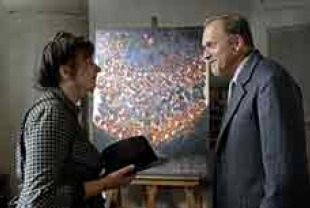 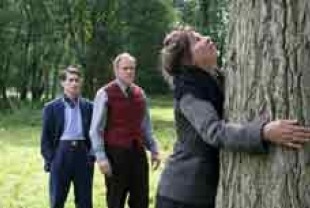