The Way We Get By

Directed by Aron Gaudet
An extraordinary documentary that celebrates the kindness of three elders who serve as troop greeters in Bangor, Maine.

Kindness is a human virtue that can be caught, and it also can be taught. In long-ago cultures it was the quality of life that ensured the survival of communities. In South Africa the term ubuntu conveys a sense of personhood in which each person is seen as interdependent with others. We are bonded because we share and care; we have a built-in propensity to help others.

Kindness is emphasized in all the world's religions, and recent scientific research has shown that being kind is also good for our health and makes us happier. But let's remember this point: kindness is a choice; we decide that we want to make a difference (no matter how small) in the life of someone else.

Aron Gaudet is the director, editor, and co-director of photography of this incredibly inspiring documentary about three elderly people in Bangor, Maine, who have chosen, sometimes at great inconvenience to themselves, to be kind. They serve as airport greeters of American military troops leaving or returning from wars in Iraq and Afghanistan. Their story offers a fresh, intimate, and poignant depiction of how the spiritual practice of kindness can enrich one's own life and give meaning to others. It is also about aging, loneliness, war, and facing death. Gaudet focuses on three troop greeters — 87-year-old Bill Knight, 75-year-old Joan Gaudet (the director's mother), and 74-year old Jerry Mundy.

Bill is a veteran of World War II who lives on a farm and deeply misses his wife who died many years ago. He derives great satisfaction from his participation in the troop greeters program given his respect for soldiers and the sacrifices they are making for their country.

Bill has a batch of challenges which deplete his energy. Credit card debt forces him to move out of his cluttered farmhouse to a smaller place closer to the airport. In the process of throwing away the debris and possessions of his lifetime, Bill is forced to deal with his grief over the death of his young son and the loneliness he feels today. In addition, he has been diagnosed with cancer, and it seems to be spreading throughout his body. This compels Bill to face his feelings about death. Nonetheless, he is ready, able, and willing to go to the airport at any time of the day or night to be present for the soldiers.

Joan suffers from constant pain and is forced to sleep in a chair at night. She takes a large amount of pills and tries to make the best of her physical ailments and vulnerabilities. Joan has raised eight children and is now enjoying her grandchildren. Of the three volunteers profiled in this documentary, she is the only one who speaks of her doubts about the war in Iraq and the validity of the United States trying to shape that country's future.

Joan is a very emotional woman and prefers to greet returning troops; she has been unable to say goodbye to those leaving for the wars. But when her granddaughter is ordered to go to Iraq, she goes to the airport along with the rest of the family to wish her well. It is a very touching moment in the film.

Jerry is a very gregarious man who has lived alone for many years. His beloved dog has been his best friend. At the airport, he is the one who comes across as most cheerful as he hugs soldiers, thanks them for their service, jokes around, and directs them to tables full of cell phones they can use to call loved ones. He makes them feel good with his natural charm. Jerry is slowed down by heart problems but is soon back on the job as a volunteer.

In an age when movies are celebrating gangsters, comic book figures, and assassins, it is most refreshing to see a film in which three elders are saluted as heroes of another kind: not of violence, swagger, or macho but of genuine acts of human kindness. We need many more screen depictions of ubuntu heroes who build up and support human community and well-being by their love and hospitality. Equally important, as the Baby Boom generation moves into the last stage of life, we desperately need more positive portraits of elders who find meaning and happiness in the service of others. The Way We Get By advances both of these ideals, and that is why we consider it one of the Best Films of 2009. 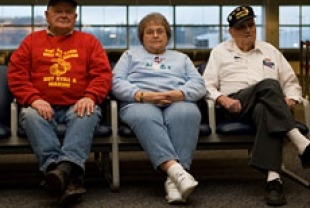 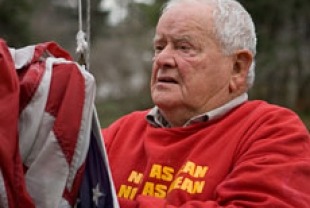 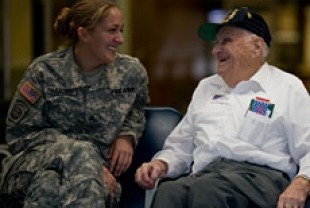 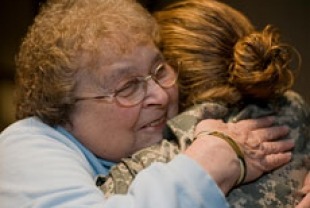