Directed by Armando Iannuci
A lively movie that sends sparks flying with its depiction of insanity and incompetence among powerful political players in London and Washington.

There's no doubt about it: In the Loop, an audacious and well-written British film, is the wildest and funniest political satire since Wag the Dog (1997). It grew out of the award-winning BBC series The Thick of It. Armando Iannuci is the director of this comedy which focuses on the art of spin in the corridors of power in both London and Washington. Some have noted the similarities between the storyline and the relations between the U.S. and England during the lead-up to the Iraq war. But it is not necessary to make this link in order to appreciate the wicked depiction of politicians as they try to deal with a nonexistent crisis that has everyone nervous about the breakout of war.

It all begins when Simon Foster (Tom Hollander), Minister for International Development, is asked about the possibility of a U.S. war in the Middle East and responds that war is "unforeseeable." Judy Malloy (Gina McKee), his Director of Communications, is upset by the comment and knows that it spells trouble for him. She is right: Malcolm Tucker (Peter Capaldi), the Prime Minister's Director of Communications, arrives with anger boiling in his belly and in the profanity of his language. His attempts at damage control are hindered when Foster does another interview and makes matters even worse by declaring that "Britain must be ready to climb the mountain of conflict." To shut him up, Tucker sends his bumbling Minister for International Development to Washington on a fact-finding mission.

Foster and Toby Wright (Chris Addison) try to find their way around the corridors of power in America and are themselves caught in the crossfire between anti-war insurgents Karen Clarke (Mimi Kennedy), the U.S. Assistant Secretary for Diplomacy, and General Miller (James Gandolfini), and a very hawkish Linton Barwick (David Rasche) who is behind a secret War Committee. The latter group have latched on to an anti-war briefing paper written by Karen's aide Liza Weld (Anna Chlumsky).

In the Loop zips along sending sparks flying with its lively depiction of insanity and incompetence among powerful political players in London and Washington. Here the debased use of language, the constant pressure of the media, and the wheeling and dealing made possible by spin doctors are all ridiculed. 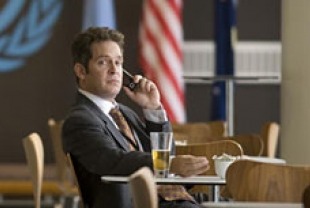 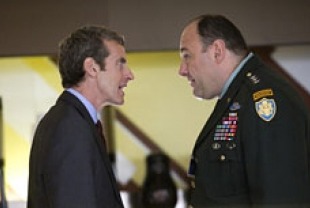