Directed by Michael Mann
A gut-wrenching portrait of two stubborn idealists who decide to stand their ground against those who want to silence them.

Robert Fulghum has written: "Never, ever regret or apologize for believing that when one man or woman decides to risk addressing the world with truth, the world may stop what it is doing and hear. There is much evidence to the contrary." The Insider was one the best films of 1999 with its trenchant depiction of a courageous whistleblower whose expose of corporate malfeasance within the tobacco industry blew open the biggest health issue of the century — the connection between cigarette smoking and nicotine addiction. Director Michael Mann co-wrote the screenplay with Eric Roth based on a Vanity Fair article by Marie Brenner. This is passionate filmmaking at its best, a drama where following one's conscience is the heartbeat of heroism.

In 1994, the seven top executives of the tobacco industry testified before Congress that nicotine is not addictive. Until then, their corporations had successfully crushed all efforts to dispute this claim. Then they learned that an industry insider was about to expose their deception of the public on this health issue.

Jeffrey Wigand (Russell Crowe) is enraged when he is fired from his executive job as head of research and development at Brown & Williamson. Some of this anger is noticed by Lowell Bergman (Al Pacino), an investigative reporter and "60 Minutes" producer responsible for the Mike Wallace (Christopher Plummer) segments of the highly rated CBS television news show. Bergman, a former radical and Ramparts magazine writer, hires Wigand as a consultant for a project, then learns that this research scientist has concrete evidence that his boss, Thomas Sandefur (Michael Gambon), lied while testifying before Congress. In an interview with Wallace taped for airing on "60 Minutes," Wigand reveals that the tobacco industry is in "the nicotine delivery business." He is subsequently sued and targeted in a national smear campaign, the pressure of which contributes to his wife (Diane Venora) divorcing him. Bergman, meanwhile, faces his own struggle with corporate power and corruption when CBS refuses to air the Wigand interview.

The Insider is a gut-wrenching portrait of two stubborn idealists who decide to stand their ground against the incredible moneyed interests that want to silence them. At one point, Bergman says to Wigand, "I'm running out of heroes. Guys like you are in short supply." Thank God that Michael Mann has brought the inspiring story of these two heroes to the screen. 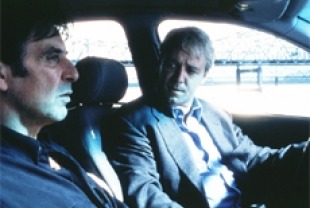