Castle in the Sky

Directed by Hayao Miyazaki
A Star Wars-like animated feature about a legendary city behind the clouds and the many secrets it holds about nature, robots, light, and magic.

This early animated film by the talented Hayao Miyazaki is a 2-Disc Special Edition of a 1986 film made in Japan. It can be viewed as the imaginative filmmaker's own Star Wars with its mysterious island in the sky, fantastic flying machines, pirate raids, explosions, and power- hungry villains. Many of these elements are nowhere to be seen in Miyazaki's later and more sophisticated and spiritual animated films. Still, there are positive elements here which are to be saluted with fanfare. The story revolves around a resilient young girl on a quest to discover the truth about the place where she was born.

Sheeta is a young orphan who has been captured by Muska, a secret agent who is being taken to a military prison. But his space ship is attacked by a band of air pirates led by Dola, the matriarch whose favorite slogan for her sons and husband is "one for all, and all for one-Mother." Sheeta escapes from both parties. She has a magical pendant they want; it allows its wearer to levitate and float on the airwaves.

Much to the delight of Pazu, an orphan who works in the mines, Sheeta lands gently in his arms. He takes her home and in the early morning serenades his doves with a tune on his trumpet. Pazu's father was a photographer who took a picture of Laputa, a legendary floating castle in the sky but no one believed him. His ambitious son is building his own flying machine in hopes of proving the veracity of his father's story. This is a fortuitous connection because Sheeta is intent upon discovering the truth about her connections to Laputa. Others are interested in the city in the sky for their own reasons. The army wants to make use of the advanced technology there that created fierce robot warriors; Muska is after a precious rock that could give him unlimited power; and Dola and her pirates just want a little extra moola.

Castle in the Sky is an animated adventure story that reminds us of many other outer space sagas with plenty of battles and fast-paced sequences. It has the signature Miyazaki picturesque visuals and a few scenes where the natural world is celebrated. An old miner even tells the wide-eyed Sheeta and Pazu that stones talk to him but you have to listen very carefully. And like the recent film Avatar, the entire structure of the floating island is built around a giant and ancient tree. There is also a brief shining moment when compassion is touted as a more powerful force than destruction.

The voices are provided by Anna Paquin, Cloris Leachman, Mark Hamill, James Van Der Beck. and others. The musical score by Joe Hisaishi lifts our spirits with its melodic sweep and grandeur; it is perfect music for flying. The special edition DVD contains these bonus features: an introduction by John Lasseter, a storyboard presentation of the movie, and an interactive feature, "World of Ghibli," that introduces the characters and Ghibli Studio where Hayao Miyazaki films are produced. There is also a new interview with Mayzaki. 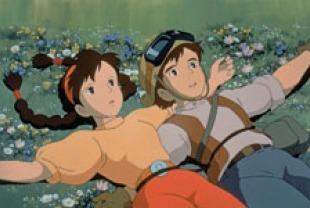 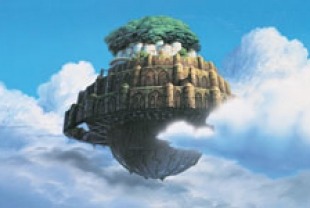