The Father of My Children

Directed by Mia Hansen-Løve
An intelligent and beautifully acted French film about work, death, grief, and finding one's way back to life.

There are few people whose lives have not been touched by suicide. A self-destruction may have been an act of desperation, the end of an inner struggle with the self, or the result of any of a thousand reasons. The survivors of a suicide are torn apart by the searing pain of separation and the questions as to what might have prevented it. There is sadness for the loss of a life and the many things left undone. And along with that often goes a feeling of anger at being abandoned.

All of these emotions and stages of grief are beautifully conveyed in The Father of My Children, a richly nuanced French drama written and directed by Mia Hansen-Løve (All Is Forgiven). The first half of the story presents the frantic work style of Gregoire Canvel (Louis-Do de Lencquesaing), a Paris-based indie film producer who has far too many projects to handle. Money problems, conflict on the sets, and the feeling that he has no where to turn make his life a seedbed of anxiety and guilt.

His loving wife Sylvia (Chiara Caselli) tries to be understanding of his constant cell phone calls and business trips but she loses patience with her workaholic husband on a trip to Italy with their daughters, Valentine (Alice Gautier) and Billie (Manelle Driss). Gregoire makes an effort to stay closely connected with them but in Sylvia's eyes, it is not enough. His eldest daughter Clemence (Alice de Lencquesaing), a teenager, is wrestling with her roots and wings.

When Gregoire kills himself, his family is both shocked and devastated. The second half of the film probes their efforts to cope with grief and Sylvia's attempt to continue the projects so dear to his heart. Writer and director Mia Hansen-Love does a fine job of drawing out and making palpable the fragility and loss felt by Sylvia and her three daughters. Gregoire's absence from their lives is unreal and troubling to them. Sylvia bravely tries to patch up the many problems in her husband's debt-ridden film company but they are beyond repair. In his office, she senses his feelings of futility and fear. Meanwhile, Clemence tries to make sense of her father's life and discovers some disturbing things about his past.

The Father of My Children admirably tackles two difficult subjects: the stress and strain of producing independent films and the ways in which families handle the grief and mystery of a loved one who commits suicide. The fact that Mia Hansen-Løve does justice to both themes is a marvel and a bit of a miracle. 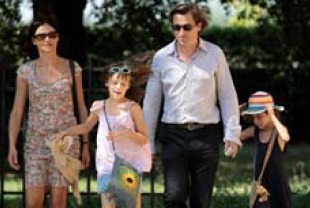