Directed by John Wells
A hard-hitting and creative examination of the scourge of unemployment, how it destroys dreams, brings untold pain and loss, and destabilizes families.

The great recession has shattered the dreams of many Americans. They've lost not only jobs but their savings, homes, and hope. More than half the nation's workers have experienced a period of unemployment, had a cut in pay, or been forced to go part-time. Right now, the average unemployed worker has been without a job for almost six months, and many families have had to move back in with parents. Mothers and fathers worry about the fate of their children, given the immensity of the problems. Meanwhile, corporations have turned lean and mean, raking in cash by cutting their workforces, doing more with less people, while making plans for future profits. As a result, the gap between rich and poor is also expanding. Hats off to the Weinstein Company and director John Wells for having the courage and creativity to release The Company Men during these hard times when most movie-goers seem to opting for escapist fare.

Bobby Walker (Ben Affleck) is earning $160,000 a year for GTX, a large manufacturing conglomerate with more than 60,000 employees. After 12 years, he has risen to the transportation sector which is not performing well. Much to his shock, Bobby is fired due to corporate "redundancies." A man imbued with self-confidence and personal poise, he is convinced that it will only take him a few weeks to bounce back into the upper middle-class corporate hierarchy. When things don't go as smoothly as expected, he joins a team of other unemployed workers at a job placement center and even takes a course in life coaching. Bobby's wife (Rosemarie DeWitt) is very worried about their lack of money: she handles the finances and knows they are living high on the hog with a giant house, a Porsche in the garage, and membership in a prestigious golf club.

After months of looking unsuccessfully for work, Bobby takes a job building houses for his brother-in-law Jack (Kevin Costner). Forced to sell his own house, Bobby and his family move in with his parents. This enables him to re-connect with his son who is worried about him. His wife says: "You were never here before, and now you are."

Another manager at GTX who is ripe for the axe is Phil Woodward (Chris Cooper), a 30-year employee who started when the company was young, before it became totally beholden to investors. Like Bobby, Phil hopes that Gene McClary (Tommy Lee Jones), a senior vice-president at GTX, will stand up for him and save his job. But this wily survivor has his hands full trying to convince the company's CEO, James Salinger (Craig T. Nelson), to stop the layoffs and downsizing. Much to Phil's dismay, his boss has bought a new building for headquarters and is taking a salary of $22 million. Gene feels guilty about Bobby and Phil losing their jobs, but there is little he can do. Increasingly alienated by his wealth and wife's avid materialism, he leaves home for an affair with Sally Wilcox (Maria Bello), the company's head of Human Resources.

John Wells, the director of The Company Men, is one of the most prolific and creative American writer/director/producers for television, film, and stage. His interest in hard-hitting and ethical drama has animated TV series such as ER, The West Wing, Third Watch, and China Beach. Although The Company of Men revolves around affluent men, there is a universality in the anger, depression, and loss of identity they experience as unemployed individuals. In an interview, John Wells has observed:

"I just got interested in the human cost of what was going on. It was something that happened to my brother-in-law. He was a VP of marketing and sales, and his company was bought out by a Swiss firm, and 5,000 people were let go. He wound up living in my parents' basement six months later. I think there really is a place for cinema that is about what is happening to people, and people do want to see their experiences reflected in film."

We empathize with the humiliations of Bobby and Jack as they wage battles against those who see them as over-qualified, too old, or too greedy. We see how unemployment threatens the stability of long marriages and rocks the relationships with children who feel the financial pressure and sense the anxiety of their parents. We learn of the ways in which grandparents have been called to the rescue of their children and grandchildren. And we see how those without work must reframe their lives and revise their priorities. Helen Keller once wrote: "When one door of happiness closes, another one opens. But often we look so long at the closed door that we do not see the one that has been opened for us." There are positive transformations engendered by unemployment, but this scourge is here to stay and there is no way around the destructiveness it continues to wreak on ordinary, hard-working Americans.

Special features on the DVD include an audio commentary with writer and director John Wells; the making of The Company Men; deleted scenes; and an alternate ending. 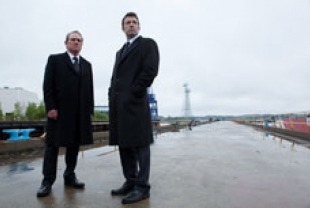 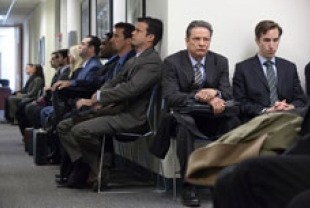 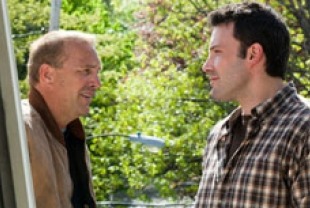