"Every brush with death is a brush with life," Rabbi Lawrence Kushner has written. But some people experience an even more daunting encounter with mortality. A doctor delivers the news of a terminal disease to Uxbal (Javier Bardem), a single-parent raising two young children in a poor, crime-ridden section of Barcelona. With late-stage prostrate cancer, this scrappy survivor is told he has only a few months to live, and his main concern is to provide a legacy for his children and to take care of unfinished business — includings the cremation of his father. His second most pressing concern is to sort out his complicated relationship with Marambra (Maricel Alvarez), his ex-wife, who has been ravaged by drugs and a bipolar disorder. She wants to be with the kids but usually proves to be an unfit mother when she's around them. In addition, Marambra is having sex with Uxbal's brother.

There is a battle raging inside Uxbal: his spiritual nature, which manifests itself as an ability to communicate with the dead, fights the law-breaking, hardened criminal who is always looking out for himself. He helps distraught people with his afterlife communications, as he digs himself deeper into a hole with his criminal activities. An example is Uxbal's involvement providing a Chinese sweatshop with illegal immigrants. When a terrible accident takes place where the immigrants sleep, it is partly Uxbal's fault. Adding guilt to his emotional baggage is not helpful or healing as he draws closer to death. His spiritual side comes through when he provides a place to stay for Ige (Diaryatou Daff), a Senegalese immigrant whose husband is arrested and deported.

Director and co-writer Alejandro González Iñárritu (Amores Perros, 21 Grams, Babel) has tackled two very substantive and thorny issues: thanatophobia and illegal immigration. In our times, the question of death is still evaded and sanitized in many parts of the world, and the status quo of many countries is being shaken to the foundations by the large number of refuges fleeing their homelands due to war, disasters, unemployment, or persecution. The magical scenes of Uxbal chatting with his younger, deceased father close the film on a lyrical and redemptive note. This character's close encounter with death propels him in the right direction but he still — like all of us — messes things up and is the cause of more human misery. Can good intentions save us? Who knows; perhaps we'll find out after we go "over there." 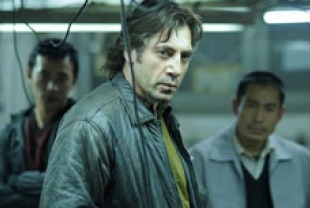