Directed by John Curran
An engrossing drama about the difficulty people have believing in forgiveness or in turning one's life around.

When his wife threatens to leave him, Jack Mabry, her corrections officer husband, takes their infant daughter and dangles her out the window. His stifled violence stuns his wife into silence and subservience in a relationship based on fear rather than love and respect.

Many years later, Mabry (Robert De Niro) is nearing retirement as a parole officer. Although he has never asked his wife (Frances Conroy) for forgiveness, he sits in judgment on prisoners who are applying for a second chance in life. One of his last cases is Gerald Creeson (Edward Norton), who calls himself "Stone." He has served many years of his sentence and is desperate to get out of jail. It is obvious that Stone will do anything it takes to accomplish his goal.

When Lucetta (Milla Jovovich), Stone's sexy girlfriend, seduces Mabry, we see another side of the righteous law-and-order man who regularly listens to fundamentalist Christian preachers on his drive home. He has divided the world into good and evil people and has trouble believing the transformation in Stone's life after he decides to follow Zukangor, a strange religious path. The two men take a twisted journey together as they talk in Mabry's office and work out their separate destinies.

Director John Curran has already demonstrated his knack for fashioning excellent character dramas with We Don't Live Here Anymore about a marriage under siege and The Painted Veil, a powerful story about transformation based on a W. Somerset Maugham novel. In Stone he draws out strong performances from Robert De Niro and Edward Norton as they do a dance of power, chauvinism, and self-absorption. The taut screenplay is by Angus MacLachlan who wrote the intriguing Junebug. Stone is an engrossing movie that shows how hard it is for people to forgive another or to believe that a person can really turn his life around.

Special features on the DVD include a featurette "The Making of Stone." 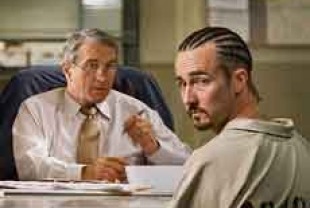 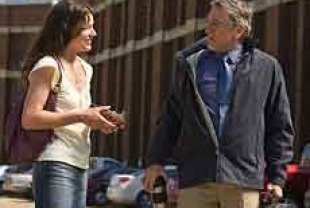 R - for strong sexuality and violence, and pervasive language