Bill Moyers: The Wisdom of Faith with Huston Smith

Welcome to the Conversation

"I thought of the time the transcendentalist philosopher Ralph Waldo Emerson confided to a friend that he would gladly walk a hundred miles through a snowstorm for one good conversation, and I remember the incisive comment by the sociologist Peter Berger, who wrote that civilization advances by way of conversation."
— Huston Smith in his book The Way Things Are

Bill Moyers: The Wisdom of Faith with Huston Smith is a 2-DVD boxed set of five episodes from the 1996 PBS series of conversations with the historian of world religions. Smith offers insights into Hinduism & Buddhism, Confucianism, Christianity & Judaism, and Islam; in the fifth episode, Smith shares his personal philosophy. This release also includes a 12-page Viewer's Guide with materials on Views of God in the different traditions, Commandments and "To Do" lists of the religions, The Concept of Service, and the Architecture of Faith.

The legendary Emmy- and Peabody-Award winning journalist Bill Moyers keeps the conversation with Smith lively and relevant to all serious and sophisticated seekers and believers with probing questions and thought-provoking quotations from a variety of fiction and non-fiction works. Those who purchase this extraordinary series will be able to join this deeply spiritual conversation.

The Highest Adventure the Soul Can Take

"Religion alive confronts the individual with the most momentous option life can present. It calls the soul to the highest adventure it can undertake, a projected journey across the jungles, peaks, and deserts of the human spirit. The call is to confront reality, to master the self."
— Huston Smith in The Illustrated World's Religions

Thomas Moore has called Huston Smith "the world's ultimate ambassador to religions everywhere, a man of passionate intellect and immense heart." As we learn in this series, Smith is still a Methodist but practices yoga, prays five times a day as Muslims do, and observes the Sabbath as Jews do. He describes his first mystical experience and the rigors he underwent in a Zen monastery during a 10-week retreat. And he reveals his respect for the intoxication of God evidenced by Sufi whirling dervishes. It is inspiring to see an intellectual who teaches and writes doing regular daily spiritual practices. Huston walks his talk.

"We are born in mystery, we live in mystery, and we die in mystery. It is not a dead mystery that bogs down in befuddlement. Religious mystery invites; it glows, lures, and excites, impelling us to enter its dazzling darkness ever more deeply."
— Huston Smith in The Soul of Christianity

In the episode "A Personal Philosophy," Smith and Moyers discuss the strong points, the pitfalls, and the challenges of religion in these secular, materialist, and scientifically-oriented times. First is the difficulty of just surviving. Smith quotes the Spanish philosopher Jose Ortega y Gassset who said life confronts us point blank. It doesn't ask if we are ready or not.

One of the benefits of religion is that it takes us out of ourselves and enables us to empathize with those who don't see any purpose or meaning to life. Smith says: "They need our full respect, because if we experienced life in the way that they do, why, we would very likely be in the same position."

"What the religions say is that there is a happy ending that blossoms from the difficulties that must be surmounted. I think these intellectual difficulties with seeing transcendence and perfection is part of the necessary groping and grappling and overcoming. Again, because then we have a part in the achievement. It isn't just handed to us."
— Huston Smith on the DVD "A Personal Philosophy"

Smith salutes the "winnowed wisdom of the world" which has been distilled in the wisdom traditions. He shares his ideas and ideals on the perfection of God, the quest for transcendence, the rivalry between religion and science on campuses, and his faith in the search for meaning, value, and worth which is at the heart of the religious adventure. In an act that reflects his humility, Smith shares a poem by Robinson Jeffers to end the series:

"A little too abstract, a little too wise.
It is time for us to kiss the earth again
It is time to let the leaves rain from the skies,
Let the rich life run to the roots again." 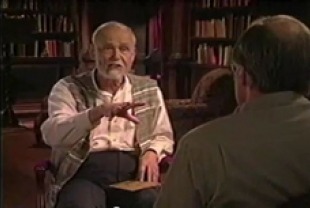 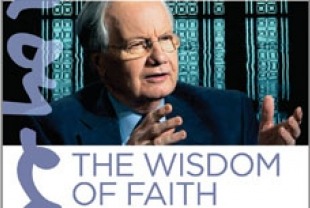