Directed by Phyllida Lloyd
An Academy-award caliber performance by Meryl Streep as Margaret Thatcher the Prime Minister revealing how her refusal to compromise trashed a nation.

In 2005 Margaret Thatcher (Meryl Streep) is an elderly former Prime Minister of England who is affected with memory loss. Those responsible for her security are shocked when following her independent spirit she scurries off to the store on her own to purchase some milk. Her daughter (Olivia Colman) lectures her mother about staying at home; Thatcher responds in anger and gives her a sharp reprimand for always being such a fussy person.

Although her husband Denis (Jim Broadbent) has been dead for eight years, Margaret still carries on conversations with him throughout the day. Memories of their past float to the surface of her consciousness as she tries to get rid of his clothes or when she hears a song they loved to dance to on the radio.

As a young woman Margaret (Alexandra Roach) is attracted to the ideals and standards of the Conservative Party. She joins and startles its male-dominated leadership with her decision to run for elected office. She rightly figures that voters want someone to look after their needs and be financially responsible and as a grocer's daughter, she thinks she is the one who can best do that. In addition, she is proud of her Oxford degree as proof of her intellectual abilities. Denis (Harry Lloyd), a businessman, proposes marriage and receives a fervent speech from her on her need to have a meaningful life and make a difference in the world. In 1959, Thatcher enters Parliament where the men on both sides of the aisle are anxious and uneasy in her presence.

When the time is right, her political advisors (Roger Allam and Nicholas Farrell) propose that she take on the challenge of leading the Conservative Party. They suggest voice lessons to take away her screechy speech patterns, ditching her hats and fancy necklace, and getting a new hair style. Thatcher's ambition is sky-high, and she goes along with most of their suggestions. Her election as Prime Minister and her conservative policies during the 1980s bring Britain to her knees with tax breaks for the rich, deregulation in the financial realm, and the breakup of trade unions. Under her watch, England had high levels of unemployment and a collapse in industrial production, increasing the gap between the rich and the poor to all-time highs. The bloody clashes between the police and demonstrators and the frequent bombings by the IRA make the country a battlefield. Through it all, Thatcher refuses to change or compromise.

At one point, Thatcher declares "I have always preferred the company of men." But the truth is that she is as hard on them as she is on women she perceives to be weak. In a blistering scene, she publicly humiliates Geoffrey Howe (Anthony Head), her Deputy Prime Minister, thus revealing her true colors as a power-hungry leader. With one masterful stroke this scene sweeps away any illusions some of us might have held that the entrance of women into politics would change things because of the gender's natural compassion, peace-making skills, empathy for the poor, and nurturing abilities. It is a sad moment as we watch Thatcher rush into the 1982 Falklands war and prove her adherence to the myth of redemptive violence. Similar to the boost American leaders have undergone after supporting wars, Thatcher's popularity jumped drastically after the Falklands.

Phyllida Lloyd (Mama Mia!) directs this ambitious biopic which is commendable only for Meryl Streep's masterful Academy-Award caliber performance as the strong-willed, domineering Prime Minister of Britain during many tense years. We do feel for Thatcher's plight in old age when the memory can falter and regrets assault the mind and the soul. The screenplay by Abi Morgan bends over backwards to give a positive slant to this indomitable English woman's political career but it doesn't wash. We see how Thatcher divided the world into good and evil forces and saw herself as a force for good and the triumph of right over wrong. What she did was single-handedly trash a country, putting its economy ever on shaky ground, while she danced with Ronald Reagan (a very brief scene in the film).

Special features on the Blu-ray/DVD Combo include: a making-of featurette; a costume-design featurette; and mini-documentaries: "Recreating the Young Margaret Thatcher," "Battle in the House of Commons," and "Denis: The Man Behind the Woman." 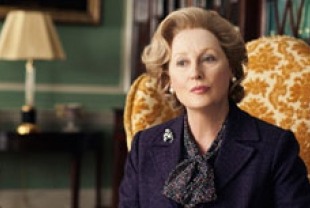 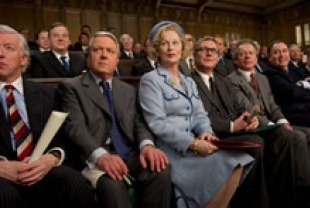 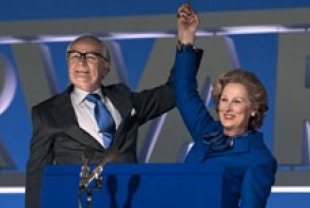 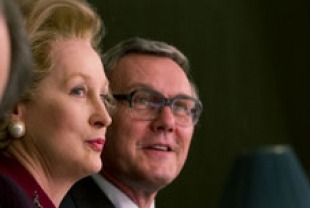 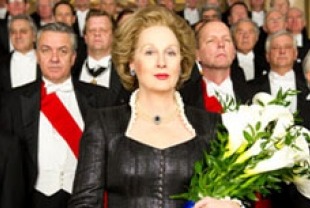