Directed by Ken Kwapis
A thematically rich drama about efforts to save three trapped whales that speaks volumes about media circuses and the benefits of cooperation.

We're Not the Stars of the Show

"Whales and redwoods both make us feel small and I think that's an important experience for humans to have at the hands of nature. We need to recognize that we are not the stars of the show. We're just another pretty face, just one species among millions more."
— Roger Payne in Talking on the Water

Big Miracle is based on a real-life incident in Alaska in 1988 during the Cold War. Adam Carlson (John Krasinski) is a local reporter in Barrow who has dreams of working in a more exciting locale. A Native Alaskan boy, Nathan, (Ahmaogak Sweeney) is the grandson of Malik (John Pingayak), an Iñupiat elder trying to keep the old ways of his people alive. But he faces an uphill battle since the youngster is already very much taken by heavy metal music and his Walkman.

One day while filming on the ice, Adam notices a strange sight. Investigating, he discovers that three California Gray whales are using a small break in the ice to surface for air; they are a good five miles from the open ocean and are essentially imprisoned by the ice. Adam breaks the story about their predicament, perfectly catching the drama of the situation. When his report is aired by Tom Brokaw on NBC Nightly News, with other reports following by Peter Jennings on ABC and Dan Rather on CBS, journalists from newspapers, magazines, and television head for Barrow. Soon the small community and its one hotel are overwhelmed by outsiders.

The Trapped Whales Get Global Attention

"More than 150 journalists from four continents representing at least 26 networks converged on the tiny Eskimo outpost of Barrow, Alaska, where on a chilly day the wind-whipped temperature can drop to 150 degrees below zero."
— from Tom Rose's Freeing the Whales: How the World Created the World's Greatest Non-Event, the book that Big Miracle, by screenwriters Jack Amiel and Michael Begler, is based on.

The plight of the whales catches the attention of Rachel Kramer (Drew Barrymore), a passionate Greenpeace activist who had a brief relationship with Adam. She has just come from a confrontation with J. W. McGraw (Ted Danson), an oil tycoon who has won leases to drill in the northern Arctic waters and also wants to drill in the Arctic National Wildlife Refuge. But his wife (Kathy Baker) slyly convinces her husband, considered by many to be a villain, that he could change his image if he moved his ice cutter to Barrow to help open a passage to the sea for the whales. A colonel (Dermot Mulroney), in the Alaska National Guard, is put in charge of this aspect of the whale rescue operation. A clever political aide in Ronald Reagan's White House (Vinessa Shaw) convinces the President to make a well-publicized phone call to the colonel commending him for his efforts.

Eco-Warriors
"Some of the new crusaders, young men and women [are] risking it all for seals, whales, you, and even invisible particles from the atmosphere. Transcending the boundaries of a world conceived only as resources and exploitation to a world streaming with life and vulnerability, they fight for nonhuman animals and elements as if life depended on it — because, in truth, it does. And in the age of despair and apathy, they shake the ground beneath the dominant class, flaunting glimmers of hope to the masses of another world possible."
— Emily Hunter, editor of The Next-Eco Warriors

Rachel demonstrates courage when she dons scuba equipment and plunges into the hole in order to see why the baby whale is having so much trouble surfacing. She is able to cut off a fishing net that is caught on his tail and is impeding his movement. When the Native council debates whether they should harvest the whales, Rachel goes on the attack. But she is forced to reframe her views when the Iñupiat hunters bring their expertise to the rescue mission. Malik reveals a spiritual sensitivity to the whales; he is able to intuit why they are acting as they are.

Strange things can happen when people of different political and social views work together. In one of the many magic moments in the story, Rachel is forced to admit to McGraw, "You're not as easy to hate as I thought." And when all the American resources can't meet the challenge, a Soviet icebreaker arrives to do battle with a large ice pack. The discussions about the political and public relations consequences of this move demonstrate that even during the Cold War, cooperation not competition is the way to go.

Ken Kwapis (The Sisterhood of the Traveling Pants, He's Just Not That Into You) directs this rescue drama with a keen sense of its multiple messages about whales, the media circus, the Western threat to the traditional Native Alaskan life, and the positive things that can happen when opposing individuals and groups band together for a common cause. The good can rise to the surface even when everyone seems to be there for self-interest.

Special features on the DVD include deleted scenes; "Truth is stronger than fiction"; and a feature commentary with director Ken Kwapis. 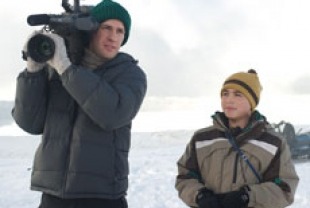 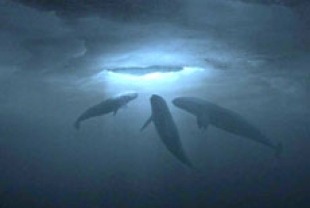 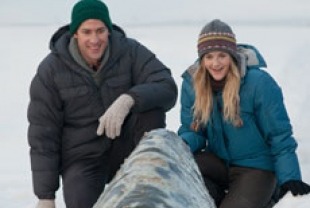 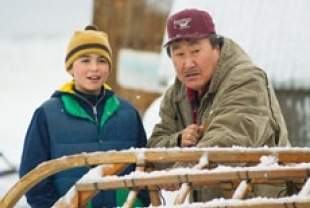 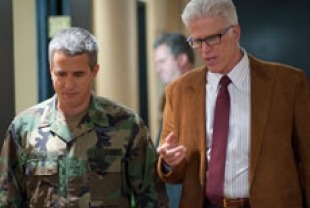 The Moon by Whale Light

When the Whales Came

At the Edge of the World