Directed by Dror Moreh
A controversial documentary where former heads of Israel's security agency explain their take on the war against terrorism.

Avraham Shalom was in charge of Israel's Shin Bet counterterrorism agency from 1980 -1986. In this refreshingly candid and controversial documentary he is joined by five other former heads of this organization. They offer a united front speaking against the ineptitude and indifference of various Israeli prime ministers. They claim these leaders had little understanding of the pain and anger of the one million Palestinians whose came under Israeli control following the Six-Day War. Since then there has been nothing but mutual distrust, violence, and countless failed negotiations and treaties.

In his debut as a documentary film director, Dror Moreh does a fine job getting these counterterrorism experts to talk about the Shin Bet's operations — the use of informers, secret missions, techniques used in interrogations, cases of torture, and strategies for dealing with the threats posed by the far-right in Israel. Two of the scariest sequences are accounts of the brutal murder of a couple of terrorists by Shin Bet agents after a bus hijacking and the assassination of Palestinian bomb-maker Yahya Ayyash via a bomb in his cell phone. Here revenge and the use of violence to fight terrorism comes across as both futile and morally bankrupt.

Avraham Shalom forecasts a "bleak" future in Israeli and Palestinian affairs since the army is now "a brutal occupation force that is similar to the Germans in World War II." Other former leaders of Shin Bet agree and lament that their homeland has become "a police state" seen in the eyes of the world as "cruel." Most of these spymasters favor a two-state solution.

The most compelling description of the continuing standoff between Israel and Palestine is that both parties have out of hatred and anger accepted the attitude reflected in the title of Philip C. Winslow's titled 2007 book: Victory For Us Is To See You Suffer. The terrorist attacks on Israel and the high tech killings of Palestinians provide continuing evidence that things have not changed and, as the former leaders of Shin Bet point out, are getting worse.

For us, the true miracle is witnessing the spiritual transformation of avid hawks into lovers of peace. We don't see that very often and when we do, we want to bow to them as our own gesture of peace. 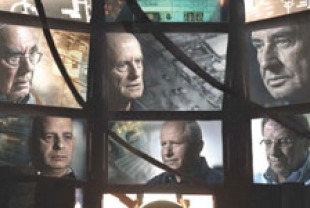