Directed by Gus Van Sant
The story of an unlikely friendship between a reclusive author and an academically gifted African American teenager, who turn out to be spiritual teachers for each other.

Jamal (Rob Brown) is a 16-year-old African American who lives in the Bronx with his single-parent mother. He attends high school in the ghetto and hides his academic brilliance from his peers by pretending to only be interested in basketball. But when he gets very high scores on his achievement tests, he is offered a chance to transfer to Mailor-Callow, an exclusive private school in Manhattan.

One day while playing basketball with his friends, Jamal takes them up on a dare to break into the apartment of a neighborhood recluse they call "the Window." He does so but while wandering around one of his rooms, he is scared away by the man. He flees without saying anything, leaving his backpack behind. Later, he finds it on the sidewalk and discovers that his journals inside have been marked up with comments on his writing. Jamal goes back to talk to the mysterious man and discovers he is William Forrester (Sean Connery), a writer whose first novel won a Pulitzer Prize in 1954. The author agrees to tutor Jamal as long as he doesn't ask any questions about him, his family, or why he never wrote another book. The boy also promises to keep their relationship secret.

Meanwhile, Jamal decides to attend the private school. Belong long he is a star on their basketball team. He picks up a friend in Claire (Anna Paquin), the daughter of Dr. Spence (Michael Nouri), a member of the Mailor-Callow school board. He also makes an enemy in Robert Crawford (F. Murray Abraham), an English professor who is threatened by Jamal's creativity.

Spiritual writer Denise Linn has observed: "My old Chinese teacher used to say that a person will draw to himself those who want what he has to offer. So, whatever your level of ability, whoever comes to you, knows within his higher self what you have to offer. And what you have to offer is what that person needs at that time." This gracious dynamic plays out beautifully in the screenplay by Mike Rich. Jamal practices writing in Forrester's quiet apartment, even using the great author's material as a spur to his own essay for a school writing contest.

The boy in turn is a facilitator for Forrester, opening up his life to a wider world. Jamal takes him to a basketball game at Madison Square Garden but the writer is overwhelmed by the push of the crowds. The resourceful youth then takes his friend to a deserted Yankee Stadium where his brother Terrell (Busta Rhymes) works as a parking attendant. There on the baseball field, Forrester, grateful for this birthday gift, breaks down and shares a bit of personal history about his close relationship with his brother.

Director Gus Van Sant (Good Will Hunting) accentuates the give-and-take in this unlikely friendship. It's a story of the lost and found, or as it says in Jamal's essay: "Losing family . . . obliges us to find our family. Not always the family that is our blood, but the family that can become our blood. And should we have the wisdom to open our door to this new family, . . . we will find that the wishes and hopes we once had . . . for the father who once guided us, for the brother who once inspired us, . . . those wishes are there for us once again." 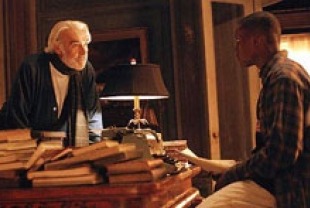 Read our reflections on Finding Forrester

Read our reflections on Teachers in Finding Forrester