Directed by Jan Troell
The struggle of a Swedish theology student turned crusading journalist to speak truth to Hitler's power while dealing with his own shadow side.

In The Emigrants and The New Land Swedish filmmaker Jan Troell salutes the courage and determination of a Swedish couple who make the long journey to America in the 1850s and then struggle to survive in the wilderness. In The Last Sentence, there is struggle as well but it is in opposition to the dangerous rise of Adolf Hitler as an amoral and power-hungry leader of Germany in the 1930s. Whereas in Everlasting Moments, Troell probed the life of a poor working-class mother of seven who keeps her soul alive through nurturing her talent as a photographer, here the emphasis is intensely focused on Torgny Segerstedt (Jesper Christensen), a Swedish newspaper editor who spoke truth to power in times when those around him kept silent due to Sweden's neutrality. The Last Sentence, shot in black and white, is based on Kenne Fant's biography of this revered and controversial figure. When asked in an interview if any modern prophet reminded him of Segerstedt, Jan Troll mentioned Edward Snowden.

Segerstedt is a theology scholar who becomes editor-in-chief of Gothenburg's liberal newspaper in Sweden. Shortly after Hitler comes into power, he begins a series of editorials against him and the vicious Nazis who are carrying out his orders and persecuting the Jews. Segerstedt possesses an unshakable force of honesty and truth in his writings. He refuses to yield his position even when King Gustave V (Jan Tiselius) orders him to stop betraying the country with his vehement attacks on the German leader.

There is an air of arrogance about this self-absorbed prophet that irritates many in his social circle. He and his wife Puste (Ulla Skoog) have had four children but despite their early love for each other, their marriage is an empty shell. Instead, Segerstedt has turned to Maja (Pernilla August), the morphine-addicted wife of his publisher Axel Forssman (Bjorn Granath) for both passion and adulation of his moral stand. They flaunt their affair in front of others, which makes his wife feel abandoned and humiliated.

Troell has created a rounded and engaging biopicture that vividly conveys this crusading editor's brilliance and moral courage while at the same time revealing his shadow side in his hurtful treatment of his wife. Even more revealing is the continuing presence of his mother in his dreams and the loyalty and love he lavishes on his three dogs. Segerstete died of a heart attack just a few days before the surrender of the Third Reich. He had long predicted that Hitler would lose the war.

Special features on the DVD include "A Close Scrutiny": behind the scenes of The Last Sentence by Yohanna Troell. 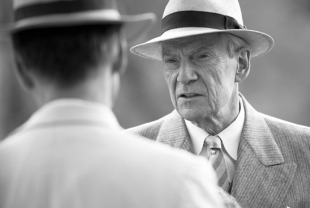 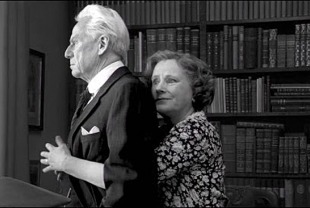 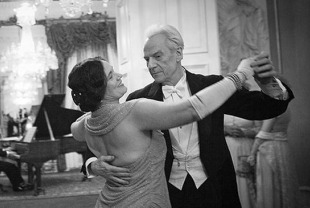 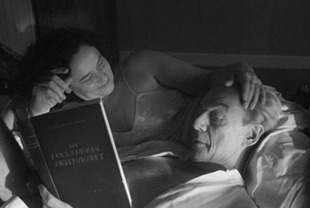