Directed by Mike Leigh
An extraordinary portrait of the last stages in the life and career of Joseph Mallord William Turner, the painter of light.

Joseph Mallord William Turner (1775-1851) has been called the greatest landscape painter of the 19th century and a pioneer in the artistic exploration of light. In this extraordinary portrait of the last stages of his life and career, English director Mike Leigh catches the intensity of his commitment to art and the many eccentricities which made him such a colorful character in his times. This biopicture has the sweep and brio of Topsy-Turvy (1999), Leigh's lively and entertaining examination of the rewarding but often competitive partnership of Gilbert and Sullivan, the famous comic-opera writers.

The film begins in the late 1820s with Turner (Timothy Spall) coming home from a painting excursion in Belgium. He lives with his elderly father William (Paul Jesson), who serves as his manservant, and Hannah (Dorothy Atkinson), his housekeeper. As a bachelor, Turner has sex with her whenever he wants. Although this creative artist is able to meet the challenges of his art, he is less successful in dealing with the obligations of human relationships. Sarah Danby (Ruth Sheen), an ex-lover, considers him a monster given his indifference to his two daughters.

Turner relishes the freedom that has come with riches and fame. Although he is aware of the work of his peers at the Royal Academy, he follows his own path and resides on the periphery of the artistic establishment. His cloudy canvases and his use of color are not all that popular but Turner is beyond caring what others think of his style.

Timothy Spall gives a rich and enthralling performance as the idiosyncratic artist who possessed a repertoire of grunts to convey the emotions he did not wish to put into words. Leigh and Spall hit high stride in their handling of Tuner's love affair with Mrs. Booth (Marion Bailey), the landlady of a seaside house. She has been widowed twice and is the good woman he has been looking for all of his life. Her gentleness, charm, and enthusiasm carry him through many a dark day. In one of the most magical moments in their relationship, he looks into her eyes and says "You are a woman of profound beauty." She is moved and so are we. 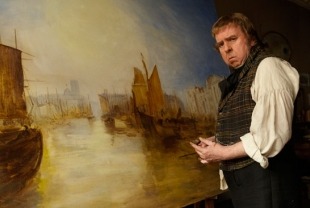 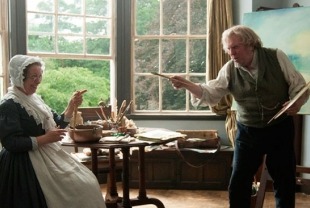