Directed by Thomas Lilti
A thought-provoking film with heart about the developing friendship between two interns at a Paris hospital.

Benjamin (Vincent Lacoste) is a 23-year-old intern who is just beginning six months of training at a Paris hospital. He is a friendly young man determined to do his best in the ten rooms and with the 18 patients who will come under his care. When he has some trouble administering a spinal tap, Abdel (Reda Kateb), an Algerian doctor with an intern status, shows him a trick for the procedure. However, Benjamin gets in more trouble when he fails to give an electrocardiogram to a homeless man whom the staff have nicknamed Tsunami (Thierry Levaret). The poor fellow dies of a heart attack.

Benjamin's father (Jacques Gamblin), who is head of operations on the ward, finds out the ECG machine was broken and decides to cover up his son's mistake. He tells him: "I am on your side because you're part of the hospital's family. What we do is hard enough as it is; we're not supermen."

Hippocrates is a thought-provoking French film written and directed by Thomas Lilti about the experiences of the two interns during their time at a besieged Paris hospital. The title refers to the ancient Greek physician whose oath "Never do harm to anyone" is the code by which physicians live. But in this ward there is a surfeit of problems, anger, and disappointment among the doctors, nurses, and other workers.

It is interesting to see that some of the hot spots in American hospitals are also present here: low pay, budget cuts, supply shortages, monumental understaffing, and 48-hour shifts. One woman even complains about a new manager from Amazon.

With great skill and serious intention, Lilti manages to point briefly to issues being given more attention these days: euthanasia, pain management, medical errors, and the continuing debate around accepting the standard of keeping people alive when they have had enough and would prefer to die.

The friendship that develops between Benjamin and Abdel is what gives Hippocrates its heart and its considerable humanity. The Algerian intern's treatment of an elderly 88-year-old woman contains many tender and sad moments. This is the kind of movie that bears several viewings given its rich mix of meanings. 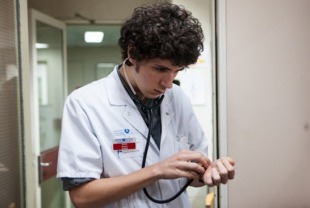 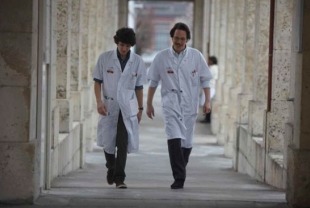 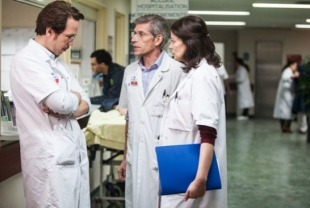