Directed by Neill Blomkamp
A techno thriller about the life of a sentient robot on the mean streets of Johannesburg.

In District 9, South African director Neill Blomkamp created a bold and startling science fiction tale about the clash between the established residents of a human community and the aliens living in a Johannesburg slum; that dystopian film revealed the catastrophic aftereffects of a "hostile imagination," a disease of the mind resulting in hatred of strangers and outsiders. The director followed up with Elysium about another dystopia where the rich and the powerful live in a separate environment away from the poor, the oppressed, and the ill; a thought-provoking thriller, it took contemporary problems and projected them into a future scenario.

Chappie is set in Johannesburg in the near future where the city has held back the tide of crime through the use of robotic police droids known as Scouts. These effective technological resources were the creation of developer Deon Wilson (Dev Patel) and have brought success to the corporation where he works, Tetra Vaal.

When Deon asks CEO Michelle Bradley (Sigourney Weaver) for permission to work on his most ambitious project yet, a robot that can think and feel for itself, she turns him down; they are, after all, a weapons company. At the same time, she gives no encouragement to Vincent Moore (Hugh Jackman), a Christian engineer whose pet project is a clunky tech warrior called "The Moose." Convinced that the Scouts are standing in his way, he is determined to do everything he can to discredit them.

Wilson takes the parts of a robot that was about to be destroyed, planning to pursue his project on his own time. But much to his dismay, he is kidnapped by a gang of three hoods, who believe he has remote controls for the police scouts. He manages to convince them to let him install consciousness into the robot, and it comes to life. They name it "Chappie" and Deon explains it is like a child and needs to be taught things carefully.

Deon, who introduces himself as his "Creator," tells Chappie that he must not lie or do dishonest things. He is delighted when the robot mimics his actions and even paints a picture of a car. But the punks tutor their new companion in their gangsta-style ways. Soon he is wearing bling, acting nasty, and learning how to use weapons for a planned heist. Will he be able to handle the violent life on the city streets? Will he side with his creator or with his surrogate parents (Yo-Landi Visser and Ninja). What are we to make out of the mind and body split in the drama? And what are his chances in a square off against "The Moose."

Although director Blomkamp obviously wants us to consider some of the pitfalls to developing self-aware robots, this film expends far too much time and energy on the violence that has become a staple of today's action dramas. It is hard to identify with Chappie although it is a lark watching him going through the stages of childhood. None of the characters in the story are very appealing, and that is a major drawback. But Blomkamp is to be commended for asking the right questions: Should robots be programmed to follow a code of ethics? How can they be kept from harming human beings? In what ways will robots change us in the future?

Even more than its musings about AI, Chappie is about the dangers of an increasingly violent world. By the last scene, we were ready to use the words of Sergeant Phil Esterhaus from the TV series Hill Street Blues to bless each other: "Let's be careful out there." 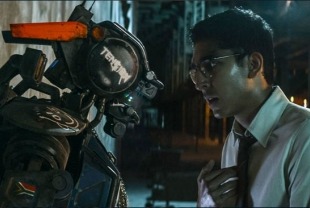 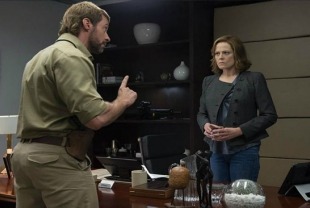 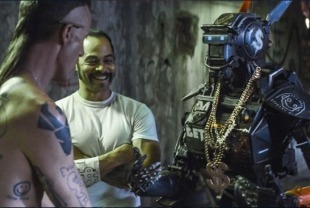 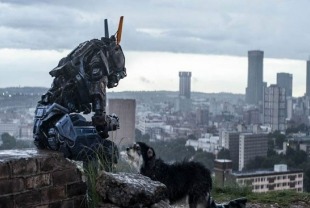