Beasts of No Nation

Directed by Cary Joji Fukunaga
Set in Africa, a powerful cry from the heart to respect the rights of young boys and end their enslavement in war.

Agu (Abraham Attah) grows up as a good boy in an unnamed West African village where his father is a teacher and his loving mother is a religious woman. As we learn in this 13-year-old boy's voiceover narration, he is a clever and creative lad who manages to sell an "Imagination Television" to a soldier who is impressed with the boy's boldness; the TV is just a frame behind which Agu and his buddies perform various skits. 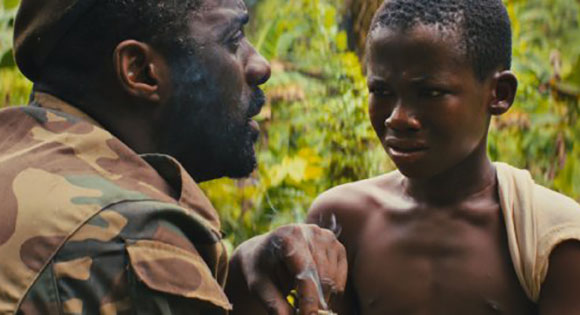 When word spreads that government forces are headed to the community, Agu's mother and her small child are sent away with other women and infants. His father, brother, and grandfather die in the brutal attack and he flees into the bush to begin a nightmarish journey into darkness, dread, loneliness, fear, and homelessness. He is soon to be like the more than 300,000 children who are currently serving as soldiers in conflicts around the globe.

Agu is found by a band of youthful rebels whose leader, the Commandant (Idris Elba), takes a liking to him. This charismatic soldier vows to make a warrior out of Agu. He treats him like a son and repeatedly tells all his soldiers they are now part of a new family. He serves as their surrogate father, military strategist, and visionary. 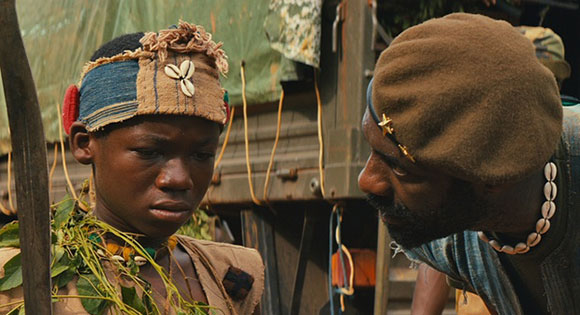 The Commandant instills in these boys a hatred for the government army which he holds responsible for murderous attacks on villages like Agu's. In a gory initiation ceremony, he orders the boy to kill a collaborator with his machete. When the Commandant baptizes the deed as an act of revenge for the murders of his father, brother, and grandfather, Agu succumbs to the violence and proceeds to learn the trade of killing.

Beasts of No Name is the first fictional feature distributed by Netflix. It is inventively directed by Cary Joji Fukunaga who demonstrated his visual acuity on a recent version of Jane Eyre. The story has been adapted for the screen from a 2005 novel by American-born Nigerian Uzodinma Iweala. Early in the drama, Agu states that the trauma in his brief life is like the rainy season when the ground is washed away beneath your feet. Nothing is ever the same. Everything is always changing.

Beasts of No Name graphically depicts the dehumanization of children forced to murder civilians, rape women and girls, and destroy and desecrate the ancestral homes of countless Africans who have no other option left than to become poverty-stricken refugees. Abraham Attah earns our empathy early on and we marvel at his resiliency and maintenance of his inner child. Idris Elba delivers a mesmerizing performance as the leader of the rebels who eventually faces his own special hell for diminishing the souls of his followers. 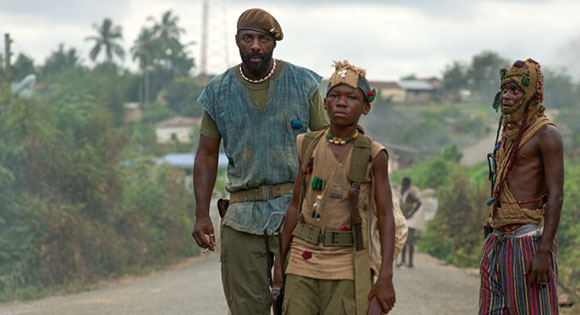 "Thousands of children are serving as soldiers in armed conflicts around the world. These boys and girls, some as young as eight years old, serve in government forces and armed opposition groups. They may fight on the front lines, participate in suicide missions, and act as spies, messengers, or lookouts. Girls may be forced into sexual slavery. Many are abducted or recruited by force, while others join out of desperation, believing that armed groups offer their best chance for survival. We are working to prevent the use of child soldiers and to hold accountable the people who send children to fight."
— Marcus Bleasdale for Human Rights Watch