Directed by Naji Abu Nowar
An intense coming-of-age and survival tale set in the desert that is both awesome and harrowing.

In his film debut as a director, Naji Abu Nowar, a British-born filmmaker, has created a scary and totally engaging coming-of-age story; it was shot in the deserts and rock canyons of Jordan. The cinematography by Wolfgang Thaler is awesome, especially the night scenes.

The story is set in the Ottoman province of Hijaz in 1916. Theeb (Jacir Eid Al-Hwietat) is the third and youngest son of a sheik who recently died. He is very close to Hussein (Hussein Salameh Al-Sweilhiyeen), his older brother who is carrying on the family tradition of serving others as a desert guide. Unbeknownst to the clan, the coming of the railway, called the Iron Donkey Trail, will put an end to the need for Bedouin guides for pilgrims to Mecca. 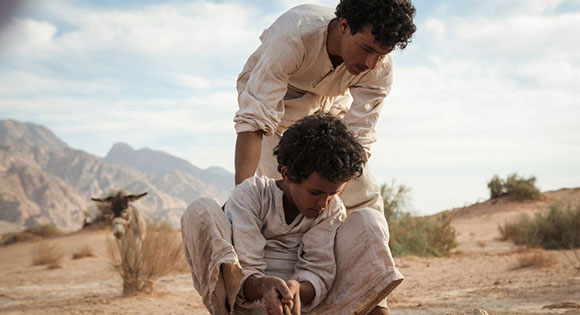 In a simple but chillingly effective scene early in the drama, Hussein leaves the family gathering and walks out of sight into the dark, convinced that he has heard someone approaching them. We are drawn into the fear that all strangers instill in us as they arrive unannounced.
The two men who emerge from the darkness with Hussein are a desert guide (Marji Audeh) and an English soldier (Jack Fox, the only professional actor in the film). According to Bedouin hospitality customs, these two visitors are welcomed to eat, drink, and stay the night. They reveal they have been told they can count on the sheik's family to guide them to a well in the wilderness. It is a dangerous route which has become the stomping grounds for Bedouin marauders and Arab insurgents.

Hussain agrees to take them to the well, which is near the Ottoman train tracks. Theeb follows them and eventually joins them on their arduous trek. The young boy who has never ventured far from home is fascinated with the mysterious Englishman and especially the large brown box which he orders Theeb not to touch. When they reach their destination, the Englishman and his guide are shot and killed by Arab bandits; Hussein and Theeb flee to higher ground and spend the night being taunted by their enemies. In a heated battle, Hussein is killed and Theeb jumps into the well in a smart survival effort. 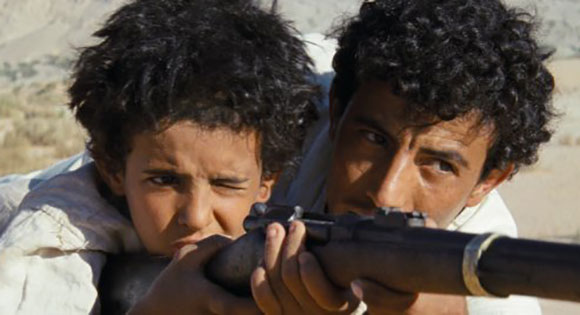 After mourning his brother and burying him, the young boy watches as a wounded bandit (Hassan Mutlag Al-Maraiyeh) appears and asks for water. Although he helps this stranger and then, in turn, is assisted by the veteran traveler, Theeb remains silently uneasy in his presence, knowing that he was in the group of those who killed his beloved brother.

Theeb is an intense coming-of-age story which turns into a tale of survival in harsh circumstances. We see everything through the boy's eyes; he is in turn curious, excited, frightened, confused, and determined. Mostly, we sense he is trying to put all the events he is experiencing together with the Bedouin belief in both hospitality and family loyalty and honor.

His name means "wolf" and he has that kind of fierceness. At the right moment, he recalls a warning given by his father: "And if the wolves offer friendship, do not count on success. They will not stand by you when you are facing death." 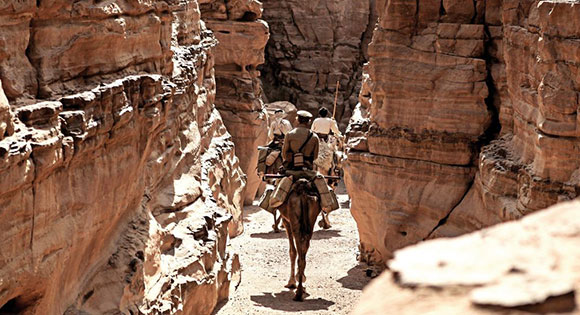