The Brainwashing of My Dad

Directed by Jen Senko
A timely and thought-provoking portrait of the soulscape of America with its rage, lack of civility, and right-wing media machinations.

"The survival of the species now depends on the development of an environment of hope.
We must contain the rage within us. . . .
We must reverse the process of frustration and despair.
We must no longer tolerate the gradual
erosion of the public space,
the diminution of our self-pride and the deterioration of mutual relationships of trust."

— Willard Gaylin in The Rage Within

The political talk in the 2016 race for the U.S. Presidency has reached a new low in lack of civility, disrespect for diversity, smear campaigns, racist slurs, mischaracterization of an opponent's views, alarmist language, misinformation, and a refusal to deal with the most pressing and important issues of the day. 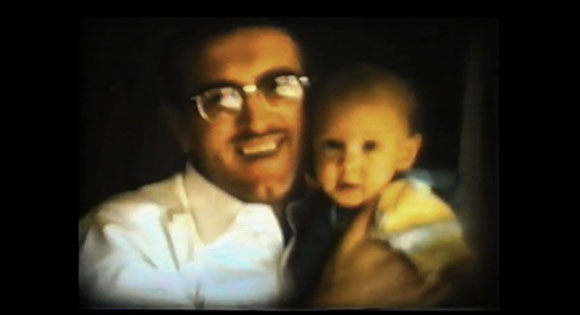 Jen Senko's timely and thought-provoking documentary addresses some of the reasons why political discourse in America is so rude, crude, and unappealing. Whereas there has been much talk about the conservatives' characterization of "the liberal bias in the media," Senko takes a hard look at the "vast right-wing conspiracy" that has been successfully launched and incarnated in Rush Limbaugh and the personalities at Fox News.

In this fascinating documentary, the filmmaker maps the brainwashing of her father who, in his younger years, was once a Kennedy Democrat, family man, and open-hearted soul. When he took a new job, he started listening to right-wing talk shows and then became addicted to Rush Limbaugh and Rupert Murdoch's Fox News Channel. Senko's dad even went so far as to move into another room in the house so he could watch Fox News all night. 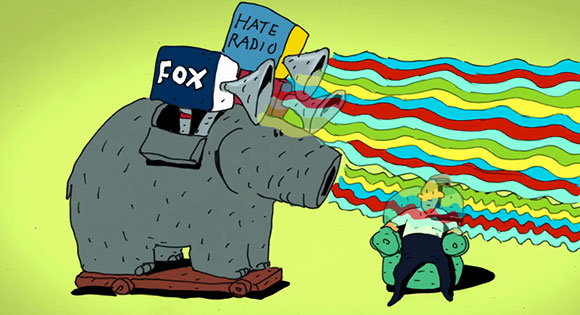 Family members were shocked by his rants against feminazis, liberals, the poor, blacks, and Mexicans who he blamed for everything wrong in America. To illustrate that the brainwashing of many elderly men is not an isolated phenomenon, Senko includes interviews with other family members who have watched the zombification of mostly male relatives. (Limbaugh's audience is 72 % white men over the age of 65 years). What they all have in common is rage fed by conservative media mavens.

Senko does more than paint a personal portrait of her father's fall into political extremism; she also shows how right-wing strategists successfully carried out a take-over of the media through the concerted creation of think tanks, advocacy groups, and media outlets. The wheeler-dealers here are Roger Ailes, Rupert Murdoch, and Rush Limbaugh, who are the proud and self-acknowledged patriotic purveyors of conservative propaganda. Senko covers this turf with an impressive group of media critics including Noam Chomsky, Reese Schonfeld, Thom Hartmann, Jeff Cohen, David Brock, and others. 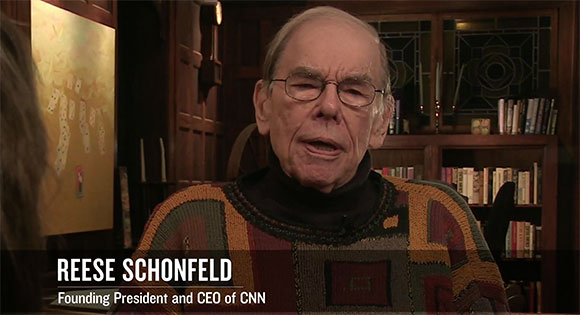 The Brainwashing of My Dad is right in sync with the times — especially the increasing polarization of the American public. Right-wingers have launched a massive campaign against everybody else based upon anger, fear, and disgust. In the pioneering feature film Talk Radio, directed by Oliver Stone, a "shock jock" star says:

"Marvelous technology is at our disposal and instead of reaching for new heights, we try to see how far down we can go . . . how deep in the muck we can immerse ourselves."

DVD: Talk Radio. This 1988 film gives us a chance to talk about the sense of community offered by certain radio and TV programs: the way they pander to the sound of America arguing; the powerlessness, fear, and frustration felt by avid listeners/watchers; and the need to offer alternatives to this disturbing phenomenon.

BOOK: In Defense of Civility: How Religion Can Unite America on Seven Moral Issues That Divide Us by James Calvin Davis. Here is a bold
challenge to religious communities to model civility and to enrich political discourse in America.

EXCERPT: This excerpt from In Defense of Civility describes how civility encourages mutual respect — a character quality and virtue which provides an antidote to the rampant rage afoot in so many places.

BLOG: Read our commentary in our Civility & Spirituality blog on an article in Alternet.org. It is a salutary wake-up call for men to replace violent behavior and rage with the tenderizing and healing capacities of compassion and empathy.

INTERVIEW WITH JEN SENKO: Read an interview with the director of The Brainwashing of My Dad by Rory O'Connor in Salon.com