"I love the jungle," says Alberto Pizango, who lives near the Peruvian rainforest that is part of the homelands of Amazonian indigenous people. In the opening scenes of this engaging documentary, we sense his deep communion and respect for this precious place. 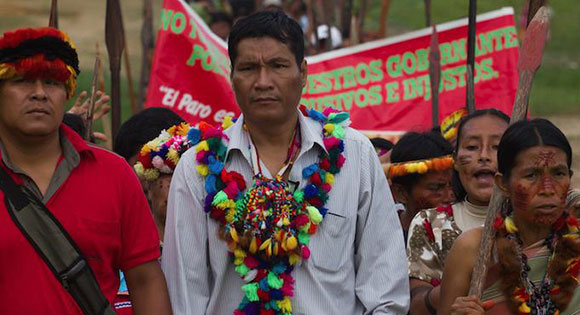 Alan Garcia, the aggressive and greedy prime minister, wants to be known as the leader who brought real economic progress to Peru by selling off "unproductive" tribal lands to foreign oil and gas companies. Following approval of the U.S.-Peru Free Trade Agreement in 2006, big businesses started their extractive work in the Amazonian rainforests.

Pizango, head of Peru's native land rights pressure group AIDESEP, is outraged at the government's takeover of the sacred lands of indigenous peoples. When he calls for Garcia to repeal the unjust laws, the prime minister and his appointees refuse to cave-in to the pressures of "savages." 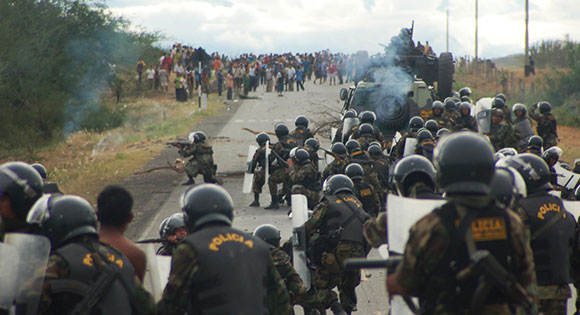 In the early summer of 2009, there are indigenous protests all over Peru with large numbers of Indians standing up for their rights. Although Pizango advocates nonviolence in this clash between indigenous peoples and Garcia's governmental forces, the protests lead to violence and the deaths of 23 policemen and 10 civilians in Bagua. The media, of course, refer to the protests as leading to a "massacre" and a disruption of law and order by blood-thirsty barbarians. Pizango is accused of sedition and murder.

Filmmakers Heidi Brandenburg and Mathew Orzel reveal the culpability of Garcia and his cronies for the deaths in Bagua. They balance this perspective with a touching portrait of a bereft father of a policeman who is looking for his missing son. We identify with his grief and need for closure.

It is gratifying to watch the leadership of Alberto Pizango unfold as he demonstrates courage and compassion in the face of a governmental smear campaign against him and all indigenous peoples. Although the laws put in place by Garcia are eventually repealed, the film's closing captions deliver the bad news that the deforestation in Peru continues and that no governmental official was ever charged in the Bagua case.

When Two Worlds Collide was presented as part of the Human Rights Watch Film Festival in New York City.