Directed by Otto Bell
A breathtaking experience of the good medicine of a golden eagle in alliance with a 13-year old Mongolian girl.

In Totems: The Transformative Power of Your Personal Animal Totem, Brad Steiger presents ways in which indigenous people around the world have explored the mysteries of life and the spirit world through the choice of a special animal ally known as a totem.

The eagle is a very popular totem and the medicine it brings includes strength, courage, wisdom, keen sight, and patience.

To watch an eagle soaring in the sky is to experience poetry in motion. Eagle teaches us to fly high while keeping our eyes on what lies below. Their vision is much stronger than humans, enabling them to see things far away.

Those who possess eagle as a totem are called to live courageously —releasing them from conventional paths and seeking out new adventures.

In this riveting documentary directed by Otto Bell and produced by Morgan Spurlock, Aisholpan Nurgaiv is a 13-year-old Mongolian girl from a nomadic herding family who wants to follow in the footsteps of her father and grandfather by becoming someone who can hunt with a golden eagle. Her dream is to be the first female to compete in the Golden Eagle Festival. 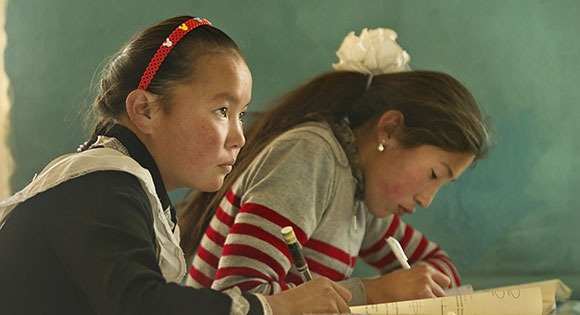 At boarding school, this multi-talented teenager is a straight-A student and a tomboy who can beat the boys in wrestling and in checkers. When she expresses her dream to be the first female to compete in the Golden Eagle Festival, her family is totally supportive. Her father Rhys, a two-time champion hunter himself, decides to help his daughter learn the art of eagle hunting. 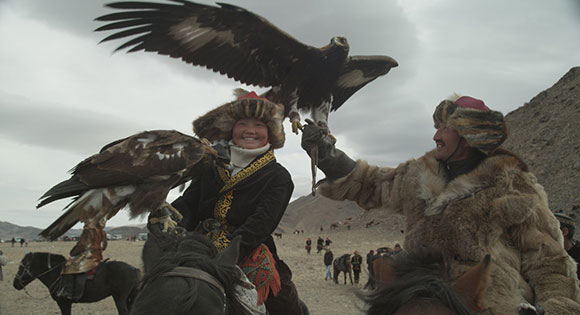 First, Aisholpan must find an eaglet she can train. High in the Alai Mountains where they live, her father takes her to a cliff where they have spotted a nest. Hanging by a rope secured by her father, the young girl lowers herself to the nest to get the eaglet before its mother returns and attacks. She raises the bird to recognize her voice and strengthens her body to be able to hold her arm steady when the fifteen pound eagle lands on it. The eagle becomes her ally and friend as they work out a communication system together.

Next up is a journey to join the 70 other seasoned veterans in the Golden Eagle Festival, all of them men and many of them quite old. But much to the shock and dismay of these eagle-hunting elders, she wins the competition and they are proven wrong with their views of girls as being "too fragile" and "not brave enough" to take home the prize. They graciously praise her accomplishments with the blessing: "May your art prosper. May our offspring be like you." 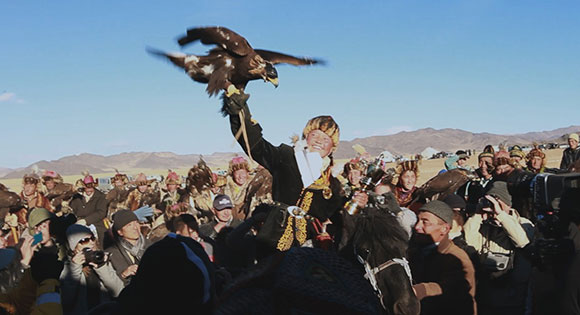 But then Aisholpan faces an even more daunting test. She needs to prove that she and her eagle can do more than the events of the competition. She and her father head out into the wilderness to hunt for a fox. They endure a dangerous ride on icy slopes and deep snow when the temperature reaches 40 below zero. 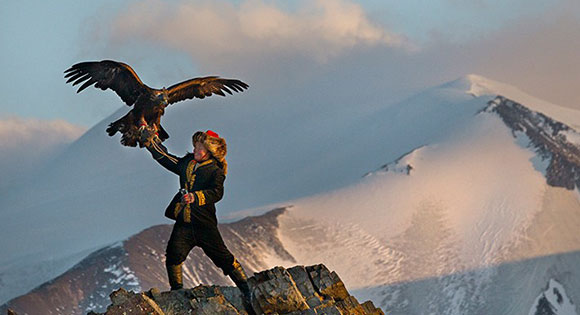 The Eagle Huntress stands alongside the feature film Whale Rider as an inspirational story about a multi-talented, disciplined, and courageous young girl who is determined to find her place among her people. In both films, these heroines must overcome the entrenched patriarchal tradition that is determined to exclude females from certain arenas of life and culture. We need more movies like these two if we are ever going to move beyond the chauvinistic gender divide.