Directed by Brian Perkins
An elegant spiritual drama about the spiritual journeys of four novice Buddhist monks in Myanmar.

Four young novice monks are learning from their abbot (Sayadaw U Zaw Ti Ka) in a remote monastery perched on a hill in Myanmar, or Burma. Their days consist of prayers and traditional Buddhist practices. Each day a local farmer arrives with food for these young boys. When the abbot decides to travel to the city, he puts Witizara (Shine Htet Zaw) the oldest boy in charge of the others.

During this period when they are alone and nervous about almost everything, their Buddhist practices prove to be centering for them. Meditation is a positive force for these novices. So are the increased periods of play instituted by the four boys. When one of them wanders off, they find him and take him to a local woman who takes away his stomach pain. 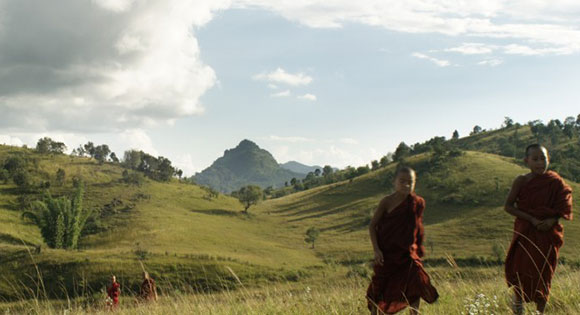 The chief worry experienced by the young monks is the hunger that overtakes them when the local farmer does not come with food. Witizara takes a trip outside the monastery where he finds deserted villages and and the sounds of gunfire in the distance. Later, a badly wounded soldier shows up and tells the boys a story about human greed and violence. Witizara tells a story of his own and has a mystical rendez-vous with his mother. 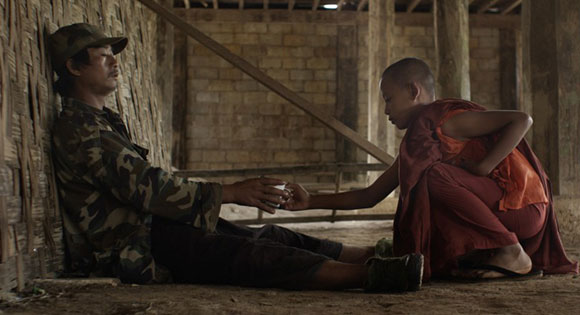 Hats off to director Brian Perkins for giving this elegant drama a slow and meditative style with lush images of the natural world (one in which trees are reflected in the waters of a pond.) The contrast between the silence and beauty of the monastery and the villages surrounding it makes an effective contrast between peace and civil war. In their spiritual journeys, the four monks are tutored like the Buddha about the impermanence of life as revealed in sickness, aging and death.