Directed by Barry Jenkins
Sixteen years in the life of a gay, poor, and bullied black man whose quest for wholeness touches our hearts.

For centuries, men have been expected to live according to a "male code," a rigid set of rules concocted by the culture and the tradition of machismo. But one version of manhood has never fit all men. Some, unwilling to submit to this standard, have become depressed, angry, or violent; they are also suffered from bullying and persecution. Many have discovered that the behavior expected of men does not adequately allow for communication and the expression of emotions in intimate relationships.

The term "man up," has been used in sports and in the military to mean that a boy or man should get "hard," toughen up, get more competitive, and be aggressive. The "soft" qualities of being vulnerable, empathetic, emotionally transparent, and open to change are underplayed. But there is great beauty and honor when men rise to their full and authentic humanity — which is both tough and gentle, caring and fierce, raw and vibrant. These men can stand their ground in the diverse, baffling, and demanding world in which we live.

Moonlight is one of Most Spiritually Literate films of 2016 with its tender and touching portrait of a poor and vulnerable black man whose softening over a 16-year period turns into a profoundly healing undertaking. Barry Jenkins directs this morality tale based upon Tarell Alvin McCraney's play In Moonlight Black Boys Look Blue. 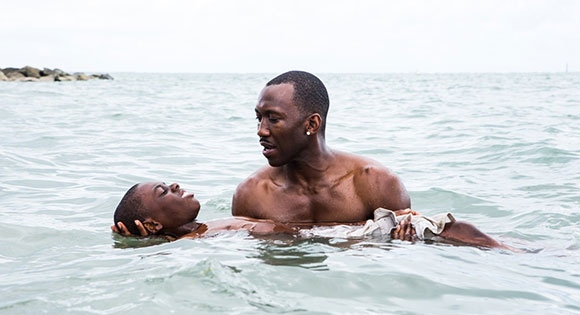 In the first of three chapters, we meet Chiron (Alex Hibbert), a black boy given the derogatory nickname of "Little." Bullies regularly beat him up at school. When a local drug dealer named Juan (Mahershala Ali) finds him shaking with fear in a dark and abandoned apartment, he takes him out to lunch. When he is unable to get Chiron to talk to him, they go to his girlfriend Teresa's (Janelle Monae) place and the boy at last begins to speak.

In one of the drama's most uplifting scenes, Juan and Chiron go to the ocean for a swimming lesson. Juan teaches the boy how to let go and float. Why does this drug dealer take such an interest in this outsider? Perhaps Little's life reminds him of his own, and as he tells the boy, "At some time you have to decide for yourself who you are going to be." 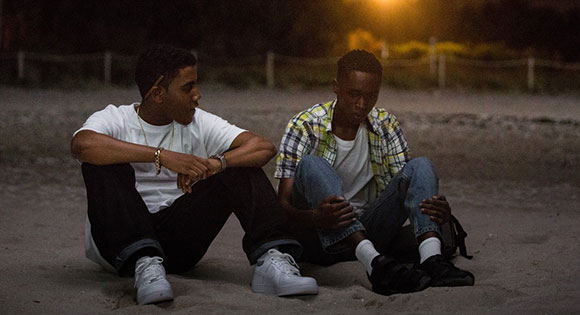 Perhaps he connects with the boy's acute loneliness and vulnerability. When Chiron asks him "What's a faggot"? his surrogate father responds thoughtfully: "A word used to make gay people feel bad." In another scene, Chiron needs some time to digest what he's feeling so he gets in a bathtub and basks in the quietude.

The second chapter deals with Chiron's (Ashton Sanders) discovery of sex with his friend Kevin (Jharrel Jeron) and his garish and scary encounter with his mother (Naomie Harris), a crack-addicted woman who, although she loves her son, laments his alienation from her during adolescence. 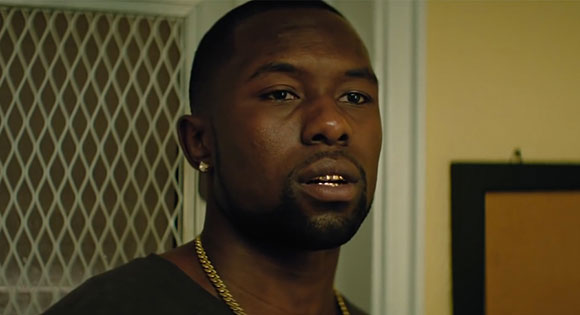 In the third and final chapter, Chiron (Trevante Rhodes), now nicknamed "Black," has grown up and spent some time in prison. He's pumped up his body and is now dealing drugs. The memories of his past as a gay outsider are evident in the way he carries himself and his identity as a black man of few words. In a moving encounter with his mother at a rehab center, he is brought to tears when she asks for forgiveness for failing him during his childhood.

Seeking closure on his only gay sexual experience in high school, Black goes to a restaurant where Kevin (Andre Holland) now works. They haven't seen each other for years, but as Kevin makes his friend a meal, we see that their boyhood connection is still there.

Little, Chiron, Black — whichever name you call him, this young man is seeking to discover who he really is amidst all the pain, suffering, and changes in his life. Jenkins' masterful direction enables us to recognize common characteristics — from body language to emotional responses — as this character evolves through three identities. And when Chiron emerges as an authentic and liberated man, we realize this is one of the best films about healing and personal transformation that we have ever seen.

R - some sexuality, drug use, brief violence, and language throughout