Directed by Martin Scorsese
An exploration of the toxic fallout from the belief that your culture and/or religion is superior to that of others.

In 1635, Fr. Sebastian Rodrigues (Andrew Garfield) and Fr. Francesco Garrpe (Adam Driver), two young and ardent Portuguese Jesuits seek permission from their superior (Ciaran Hinds) to journey to Japan in order to serve any Christians there and to find out what has happened to their mentor and former seminary professor, Father Cistavio Ferreira (Liam Neeson). These missionaries know that grave danger lies ahead for them since the 17th century Japanese officials have mounted a violent campaign against European colonial powers and against Catholic priests and any peasants who have converted to Christianity. Thousands have been killed.

After arriving in Japan, the two priests are met by a group of Kakure Kirishitan or "hidden Christians" who have been forced to practice Catholicism in secret. Local authorities are paying anyone who turns in a Christian 100 pieces of silver and 300 pieces for a priest. Rodrigues and Garrpe must say mass, hear confessions, and give baptisms in the dark of the night in order to avoid capture. Those who are caught by the authorities face a grotesque mix of tortures — having boiling water poured on their skin or being wrapped in straw and then set afire. Several devout Christians are put on a cross in the sea and doused repeatedly with waves until they drown. 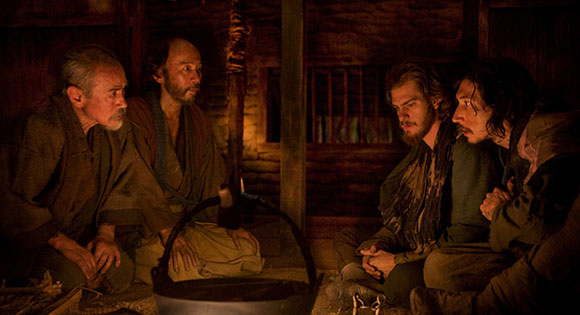 For some of these lay Christians, the worst sin is "apostasy" — the act of a believer renouncing his or her faith. The Japanese, led by a man they call the Inquisitor (Issey Ogata), have come up with a ritual for this act. The accused Christian is asked to place his foot upon a fumie, a religious carving of Jesus or Mary. Many of the peasants refuse to do this, convinced that if they die a martyr's death, they will be rewarded in Heaven. (This is a belief shared with modern day Islamic fundamentalists.)

Rodrigues and a group of Christians are eventually taken prisoner by the Japanese shogunate. A magistrate who is well-versed in Christian faith offers this idealistic priest the following option: He can save the lives of the remaining Christians if he will only step on the fumie and apostatize.
While he is making the decision that will change his life, Rodrigues ponders the place of Kichijiro (Yôsuke Kubozuka), a convert who works for him and drinks too much. Rodrigues is frustrated with this Christian who begs for the Sacrament of Penance after he apostasizes again and again. 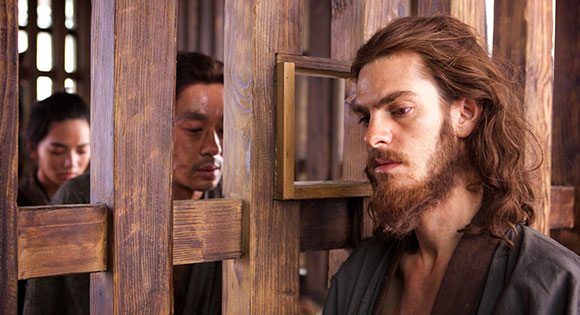 In one of the high points of this drama, Rodrigues places his bare foot on the piece of copper that has been worn thin by the feet of many men and women apostates before him. And in doing so this ardent priest profanes the God he believes in and renounces the faith that he has come to Japan to proclaim.

For nearly 30 years, Scorsese has wanted to make a film based on the 1966 novel by Shusaku Endo Edo. He might have taken this thought by Theodore Roosevelt as his guiding star: 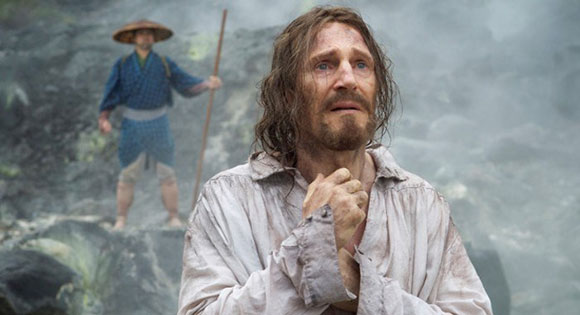 When Rodrigues finally makes contact with Father Ferreira, he learns that he apostacized after being hung upside down in the pit with blood dripping from his head. He then took a Japanese wife and became an avid student of other religions. He concurs with the magistrate that Christianity cannot take root in the "swamp" that is Japan. In a fascinating conversation he suggests that the Christians Rodriques has encountered are little more than breakaway Buddhists who still worship "the Sun of God" and not the Son of God.

Silence is such a complicated film, it is hard to pin down its main points. Similar to Shogun, the 1980 film based on James Clavell's novel, Silence laments the clash between East (Japan) and West (Europe). There are sparks of ethnocentrism — the belief that one's own culture or country is the best, most natural, right, and important — throughout the story, coming from both the priests and the Japanese authorities.

After seeing the film, we found ourselves thinking about these lessons for our own time.