Directed by James Ponsoldt
A dystopian story that raises key questions about whether technology really serves the common good.

"There wasn't any limit, no boundary at all, to the future. And it would be so a man wouldn't have room to store his happiness."

This quotation from John Steinbeck's Nobel Prize-winning 1952 novel East of Eden serves as the epigraph for Dave Eggers's 2013 novel, which has now been adapted for the screen and directed by James Ponsoldt (The End of the Tour).

The first line of the novel is: "My God," Mae thought. "It's heaven." The film explores how she could think that about the company where she works and encourages us to come to our own assessments. 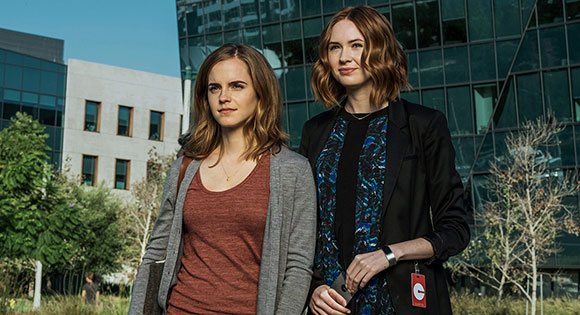 Mae Holland (Emma Watson), a recent college graduate, works in a boring and meaningless job until her friend Annie (Karen Gillan) lands her an interview for an entry-level job as "a customer experience" manager at the Circle, a prestigious and phenomenally successful tech company. On a tour of the Bay area campus, she is shown everything one could want in a work environment: green spaces, fountains, art works, recreation areas, conversation pits. What's more, the Circle has been ranked as "the most influential company in the world." No wonder Mae thinks that she's in heaven when she is hired.

Her feeling that she is part of something that is changing the world is amplified after she attends her first "Dream Friday," a weekly corporate rally headlined by Eamon Bailey (Tom Hanks), one of the Circle's co-founders. As the company's major spokesperson and visionary, he explains how what is good for the Circle is good for the world. He introduces the "Circlers" to SeeChange, a camera the size of a marble that takes pictures and sends a live feed right to the Internet and onto personal devices. This new technology, Eamon asserts, will not only help combat crime and catch terrorists, it will have human rights implications, making governments accountable for their actions. 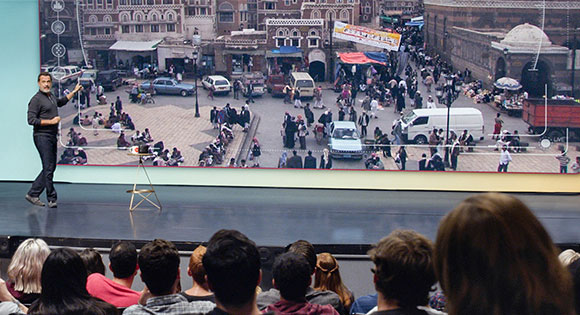 After only working a short time at the Circle, Mae is visited by two co-workers who inform her that she has fallen behind on her Social Media activities and that she is not involved enough with the community. They lament the fact that she seems to be the most "mysterious person" they know and strongly urge her to to change her ways.

When one of them ventures that they know her father (the late Bill Paxton) has MS, Mae is shocked at the extent of their knowledge about her family and private life. At a party, she learns from a zealous coworker that the Circle has come up with a system enabling parents to know where their children are at all times via a chip implanted in their bodies. The woman goes on to point out that this program has proven to reduce kidnapping, rape, and murder by 99 percent.

Mercer (Ellar Coltrane), Mae's ex-boyfriend, represents another point of view. He is worried about technology isolating everyone and creating a phony world devoid of privacy. Next, Mae meets a mysterious man at the company (John Boyega) who warns her that innovation does not always lead to the greater good. He created the TruYu profile, which combines all of a person's accounts into one identity for all interactions. Now he's worried about Circle's omnipresent surveillance and potential plunge into totalitarianism. 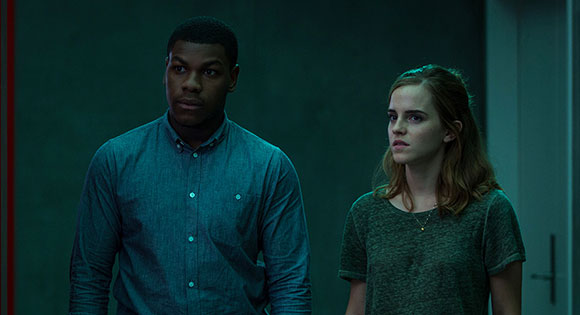 Trying to express her own feelings of independence, Mae steals a kayak and heads out into the treacherous waters of San Francisco Bay. When she gets in trouble, she is rescued by the police, who are aware of her activities because of the SeeChange cameras installed throughout the area. At the next Dream Friday, Mae confesses to her crime and the errors of her ways. Answering some key questions posed by Eamon, she comes up with a philosophy that declares "secrets are lies that make crimes possible." Going further, she asserts that "When you deprive others of experiences, you are stealing from them."

To affirm her belief that "access to all possible human experience is a basic human right," Mae decides to go fully transparent. She wears cameras every waking moment of the day and allows a worldwide audience to witness her every activity and statement. This gives her a powerful new position in the company and a platform for some far-reaching ideas, including using Circle accounts to hold elections and find people, even those who want to be off the grid, in under twenty minutes. 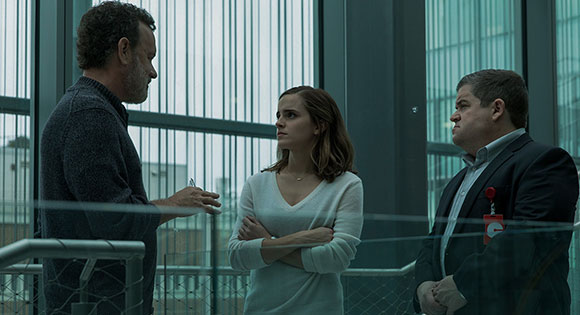 The Circle is a dystopian tale, one of those films that reflect the fears and the excesses of contemporary societies. This one is a wake-up call to those who give too much credence to the schemes and money-making dreams of high tech companies. Do you tend to assume that technology always serves the common good? To see where you stand on key issues, try answering these questions raised by the film:

What are you most scared of?
Do you believe that sharing your experiences is a way of caring?
Do you think that "Knowing is good and knowing everything is better?"
Would you call "secrets" the "hoarding of knowledge"?
Do you behave better or worse when you are being watched?
Are you an advocate of "radical openness" and "unbroken connections"?
Is privacy over?

PG-13 - a sexual situation, brief strong language and some thematic elements including drug use