The End of the Tour

Directed by James Ponsoldt
A creative and engrossing film about two writers trying to determine what is important to them.

David Lipsky (Jesse Eisenberg) is a New York writer for the Rolling Stone whose novel has just been published to tepid reviews and miniscule sales. When he picks up Infinite Jest, a bestselling 1000 page work, he is astonished at the acclaim being showered on its author, David Foster Wallace (Jason Segel) from literary critics to everyday readers. Lipsky convinces his editor (Ron Livingston) to let him do a piece on the writer after he interviews him at his home in Bloomington, Indiana, and also accompanies him on the last stop of his book tour, Minneapolis. 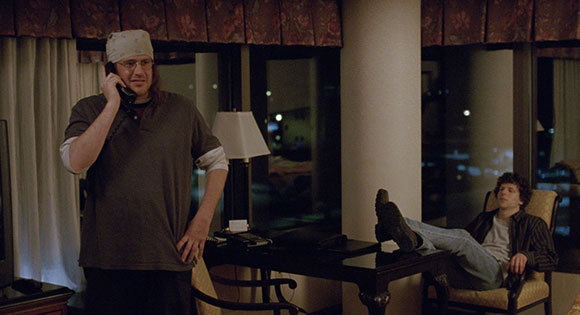 Lipsky doesn't know what to expect but it is clear that he sees the profile of Wallace as a challenge and an adventure. But he is savvy enough to know that as a profile writer for hire, his job is to probe and pry into the life and work of this towering genius and to address the rumors that have been swirling around Wallace since the release of Infinite Jest.

Wallace greets the New York writer outside in the snow and introduces him to his slobbering dogs. He looks like a hippie with a bandana around his forehead and two long strips of hair dangling down the side of his face. Like Faulkner and other reclusive writers who wrestled with fame, Wallace likes attention but much prefers being by himself. He is definitely worried that Lipsky will cave in to the lowest form of grilling and gossip designed to feed the voracious appetite of cultural savants. 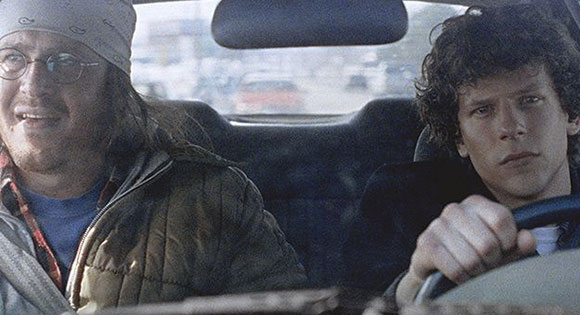 The interview hops, skips, and jumps along, moving sporadically from one subject to another. We are entranced by the conversation as it embraces the craft of writing, the bane of celebrityhood, the unreality of popular culture, and the danger of a future technological society where people will be addicted to "pure unalloyed pleasure."

Things get messed-up as the egos of the two Davids clash. In Minneapolis, Wallace does a reading and then a radio interview which the escort provided by his publisher (Joan Cusack) finds terrific. Julie (Mamie Gummer), a fan and friend, and Betsy (Mickey Sumner), the bestselling novelist's college girlfriend, join them. Wallace gets upset when he sees the New Yorker flirting with Betsy. Earlier, Lipsky had gotten bent out of shape and accused his girlfriend Sarah (Anna Chlumsky) of coming on to Wallace during a long-distance call. 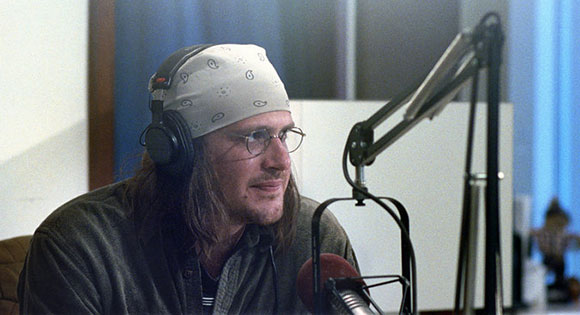 The End of the Tour is directed by James Ponsoldt who has a special gift for mining the most meaning out of character-driven films, such as Spectacular Now, Smashed, and Off the Black. It is quite remarkable how many feature films have been made about writers. One day we will curate our favorites but for now we can say that this one worked its way into our hearts and consciousness big time.

Jason Segel puts in a remarkable performance as the self-effacing Wallace whose attempts to cover-up his flaws misfires and he is revealed as a tender and tragic artist hobbled by depression and loneliness. Jesse Eisenberg is just right as the nervous New Yorker who is awed by his rival and intensely jealous of him. He wants to be his buddy but at the same time is willing to do whatever it takes to grab his own pot of fame and fortune.

R – language including some sexual references