Directed by Pacho Velez, Sierra Pettengill
An expose of how politics became spectacle during the Reagan Presidency.

Ronald Reagan, the 40th President of the United States, has been called "the patron saint" of the conservative movement but his legacy extends far beyond that. Pacho Velez and Sierra Pettengill, the directors of this enlightening documentary, note that this leader acted in his first film in 1937 and taped his last appearance on television in 1994. Add it up and it comes to 57 years in front of the camera. The mythology of the cowboy dominated his film career, his economic policy, and his foreign policy.

The directors have chosen archival footage shot by the United States Naval Photographic Unit documenting Reagan's years in office. Almost every day of his presidency was filmed. We see the ways in which his handlers created for Reagan a carefully cultivated persona who could be folksy (telling funny jokes), tough (defending his Star Wars program), or tender (holding hands with his wife Nancy). Reagan treated politics as a spectacle and took pride in his being known as "the Great Communicator." Presidents who have followed him have tried to replicate his style. 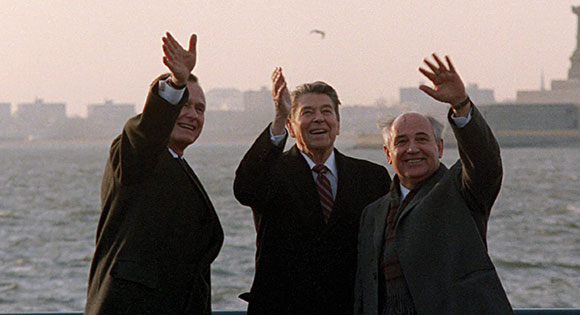 Perhaps the most noteworthy material in The Reagan Show is its coverage of the Cold War years when the President and Soviet General Secretary Mikhail Gorbachev squared off against each other over the issue of nuclear disarmament. After several summits and difficult negotiations, characterized by public relations battles, the two leaders signed an arms reduction treaty. Unfortunately, it was not enough. The scary threat of World War III still hangs over us, and both countries have done little to alleviate the frightening prospect of a nuclear holocaust.

The Reagan Show was presented as part of the AFI Docs Film Festival 2017.