The Trip to Spain

Directed by Michael Winterbottom
A hilarious journey with two middle-agers savoring the pleasures of Spain.

"Of middle age the best that can be said is that a middle-aged person has likely learned to have a little fun despite his troubles."

This jaunty and hilarious film follows The Trip and The Trip to Italy, two other travel adventures starring comedians Steve Coogan and Rob Brydon. This time the two middle-aged actors arrive in the homeland of Don Quixote and Sancho Panza to take in the sights and review some of the country's high-rated restaurants.

These clever and accomplished men are both friends and rivals. Steve Coogan is able to talk nonstop in paragraphs about any subject under the sun. Rob Brydon, once again, proves himself to the funnier of the two with his well-honed improvisational skills. 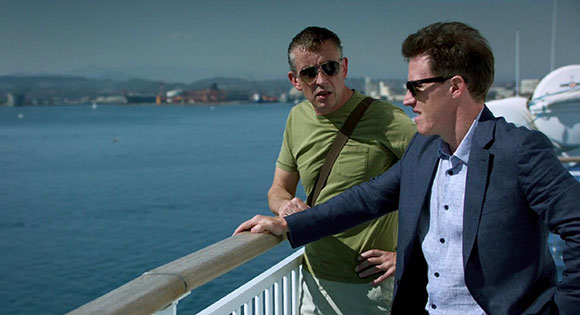 On the ferry to Europe from England, driving through the countryside, and staying at exclusive hotels, they regale one another with snappy impersonations of Michael Caine, Sean Connery, Robert de Niro, Marlon Brando, Roger Moore, and Mick Jagger. Even when their sumptuous meal at the famous bistro Txoko is interrupted by a downpour, they take it in stride.

Steve Coogan laments the fact that his acting career has not taken off despite his Oscar nominations for screenwriting. He winces when he learns that his agent has abandoned him and that a hot young writer has been hired to polish his latest screenplay. Then his son cancels out on joining him for the end of his trip, and the actor is crestfallen. 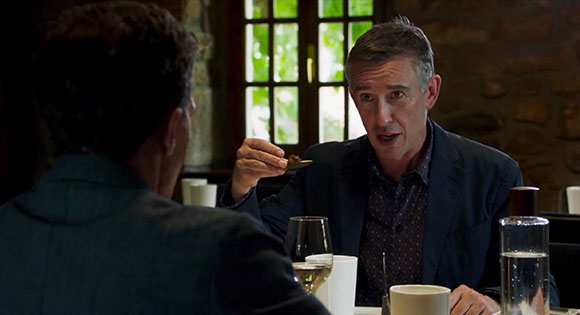 Michael Winterbottom, the director, makes the most of the scenery, the colorful cuisine, and the witty banter. Here humor is an antidote to the disappointments which are part and parcel of the experience of middle-aged men. In a memorable scene in The Trip to Spain, Coogan and Brydon sing together "The Windmills of Your Mind" where the lyrics go:

"Like a circle in a spiral, like a wheel within a wheel
Never ending or beginning on an ever-spinning reel
As the images unwind
Like the circles that you find in the windmills of your mind."