The Meyerowitz Stories (New and Selected)

Directed by Noah Baumbach
A hard-hitting dramedy about the emotional fireworks set off by anger.

All of us are familiar with the explosive power of anger as it overwhelms other feelings and poisons intimate relationships; it is even capable of snuffing out love, happiness, and joy.

Noah Baumbach has fashioned a funny, hard-hitting, and insightful dramedy about the varied guises of anger in the lives of a Manhattan sculptor, his wife, his two sons, and his daughter. The family has been rocked and shocked by his rage and disappointment over the years about not being judged a success as a creative and famous artist. Just note the crazy responses that run through Harold Meyerowitz's (Dustin Hoffman) head as he attends the successful MoMA show of L. J. Shapiro (Judd Hirsch), a contemporary of his.

The sculptor's unemployed son Danny (Adam Sandler) arrives in the city with his teenage daughter Eliza (Grace Van Patten) who is on her way to begin college at Bard. Since his wife has left him, Danny is looking forward to staying at his dad's place. Only trouble is, Harold and his fourth wife Maureen (Emma Thompson) have decided to sell the family house.

Danny suddenly finds himself pitted once again against his half-brother Matthew (Ben Stiller), a successful personal wealth lawyer who has relocated to Los Angeles and is organizing the sale. Matthew has always been his father's favorite, and despite all his attempts to win his father's favor, Danny never felt good enough. For one thing, he never nurtured his singing and songwriting talent. 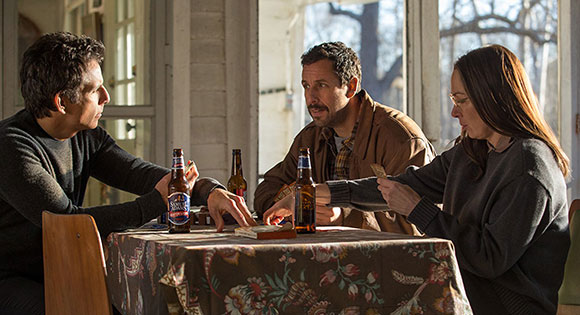 For both sons, Harold has been a cocky and emotionally absent father. In addition, he has not passed on a thing to his shy and lonely daughter Jean (Elizabeth Marvel), who has a secret that she shares with the gathered family. When her brothers learn that the man who exposed himself years ago to her has parked nearby, they proceed to trash his car.

Noah Baumbach both wrote and directed The Meyerowitz Stories (New and Selected). Through witty and very realistic dialogue it explores in depth the neuroses and stumbling blocks in marriages, families, and society at large. These toxins are very present in the interactions of Harold, Danny, Matthew, and even Jean. Multiple anger explosions leave the siblings exhausted and their father hospitalized. 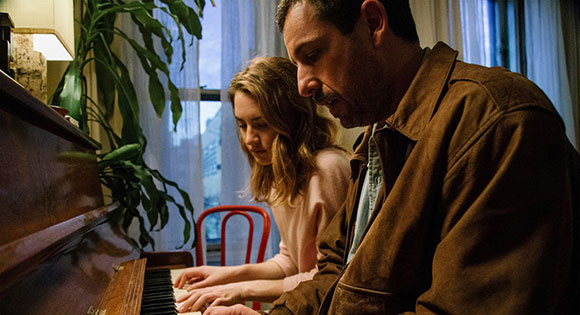 Anger is one letter short of "danger." Baumbach knows just what that means and has made a poignant dramedy about it.