Directed by Lee Unkrich, Adrian Molina
A wonderful animated feature set around the Day of the Dead in Mexico.

On the Day of the Dead (Dia de los Muertos) Mexicans and others around the world celebrate in ceremony, theater, and ritual the return of the dead to earth to savor the fruits and flowers of this world. Picnics are held in cemeteries over the graves of relatives, people dress up in costumes, and vendors sell goods in the carnival-like atmosphere. Relatives often create trails of marigold petals from the cemeteries to their houses to guide their ancestors home.

In the Disney-Pixar animated film Coco, twelve-year-old Miguel (voiced by Anthony Gonzalez) lives in the village of Santa Cecilla in Mexico. His passion is music but his family has banned it for several generations. His great-great-grandfather chose a music career over life with the family, and the succeeding generations have never forgiven him. Miguel has a secret place where he practices his guitar while watching movies of his hero, the great Mexican singer/actor Ernesto de la Cruz (Benjamin Bratt). 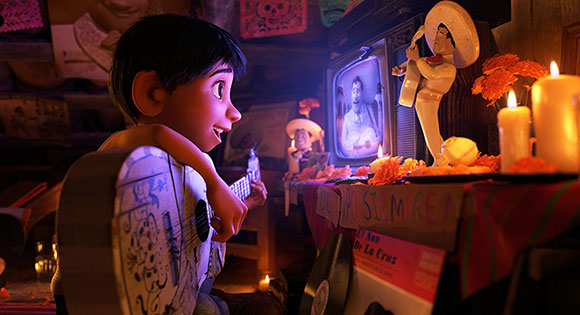 As the Day of the Dead approaches, there is an indescribable excitement in the air. Everyone in the village is getting ready to honor their arriving loved ones with decorated home altars, candles, foods and beverages, and flowers. In Miguel’s home, pictures of three generations of ancestors are placed on the ofrenda. The top photograph, however, is torn where the musican ancestor would have been. 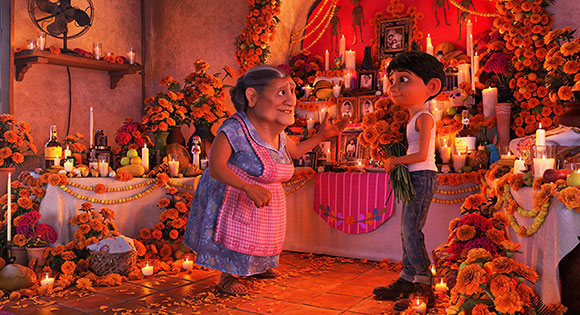 Determined to compete in a music contest in the plaza, young Miguel decides to borrow the guitar kept in Ernesto de las Cruz’s tomb. Suddenly he finds himself transported to the land of the dead with his street dog named Dante. This place turns out to be a large metropolis, with amazing brightly lit homes. On the bridge from there to earth, he meets several generations of his ancestors. One of them promises to give him the blessing he needs to return to earth, but with the condition he give up music. Miguel decides instead that he will find de la Cruz, whom he believes might be the missing musician from the photograph, and get his blessing instead. 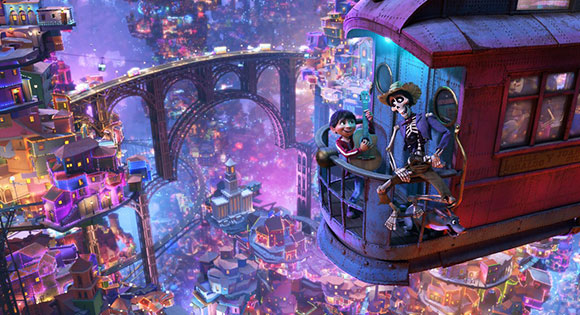 During his journey, Miguel gets some help from a skeleton named Hector (Gael Garcia Bernal), who wants the boy to take his photograph to an ofrenda so that he can visit his relatives on earth. Unless he is remembered by them, he cannot travel on the Day of the Dead. And eventually, he will disappear forever. Memory, Miguel learns, is very important.

Other themes of this charming film are the importance of honoring those who have gone before us, acknowledging the afterlife, having a passion for life, and creating family solidarity through rituals. Toy Story 3 director Lee Unkrich hits all the right marks in this impressive animated feature with its all Hispanic cast, its celebration of the restorative power of music, its lavish creation of the land of the dead, and its simple emphasis on an old photograph as a key to a young and talented boy's future. 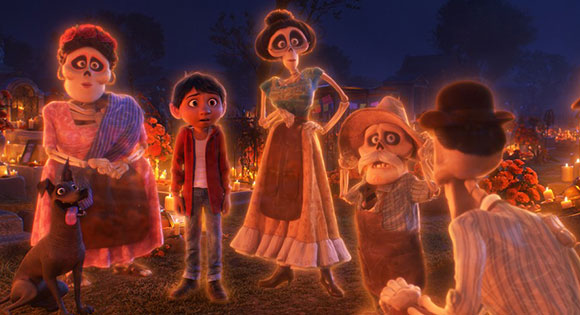 One scene is especially emotionally affecting — watch for it — when Miguel sings his great-great-grandfather’s song “Remember Me” to his great-grandmother Coco (Ana Ofelia Murguia).