Won't You Be My Neighbor?

Directed by Morgan Neville
An inspiring portrait that reveals how Mister Rogers showed children that they are loved and capable of loving.

"Love is at the root of everything: all learning, all relationships. Love or the lack of it."
-- Fred Rogers

These are good times for those who admire Fred Rogers.

On September 4, Abrams Books will release The Good Neighbor: The Life and Work of Fred Rogers by Maxwell King, the first full-length biography of the television icon.

Meanwhile, Tom Hanks has been cast as Fred Rogers for a feature film, You Are My Friend, directed by Marielle Heller in which a reporter's life is transformed by the soft-spoken minister.

This documentary by Morgan Neville (20 Feet from Stardom) reveals why a Presbyterian minister from Pittsburgh, Pennsylvania, deserves such attention. The director has gifted audiences with an emotionally intelligent film about a television personality who reverenced children and bequeathed to them his spiritual vision of love, kindness, caring, compassion, respect, and much more. Won't You Be My Neighbor? is one of the Most Spiritually Literate Films of 2018! 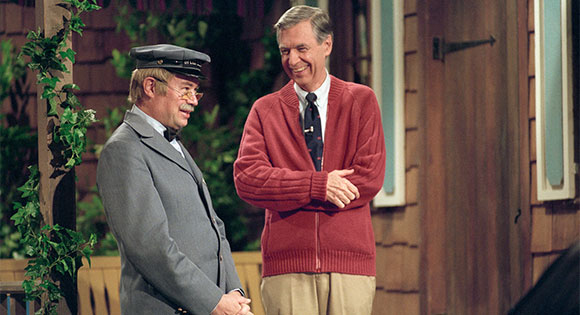 For Fred Rogers, love is the matrix of the world in which we live. And from that force field of energy and beauty and meaning comes the goodness of human beings. On his television program, he constantly assures the children that he loves them just the way they are. He advises us all not to give up or exclude anyone from the marvel and mystery of the banquet of life.

Blending archival footage and interviews with colleagues and fans, Neville shows how and why Rogers conveyed his gentle lessons from his television house. One friend notes that Rogers remembered what being a child was like and kept in touch with his own inner child. He studied early childhood development and concluded that the feelings of children are every bit as important as those of adults. 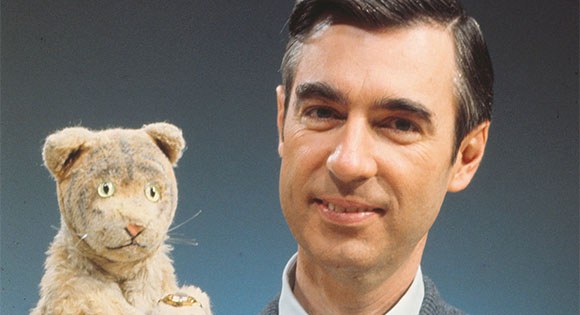 Mister Rogers was the writer and producer of his show and also did the voices for 10 different puppets. One of the most beloved was Daniel the striped tiger. During one program, he confesses a fear that children can feel about being a mistake because they aren't like anyone else. A commentator on that segment (see it on YouTube) notes that it ends with a duet with Lady Aberlin in which Daniel continues to question, demonstrating that "it's not so easy to quiet a doubt."

Other lessons on loneliness and friendship are mixed with more edgy commentaries on the assassination of Robert Kennedy, the Challenger disaster, and other events. During a time when some communities were having trouble with interracial bathing in swimming pools, Mister Rogers invited an African-American policeman (Francois Clemmons) to join him soaking their feet in a common tub. At the end, Rogers repeats the ministrations of Jesus as he dries his friend's feet. 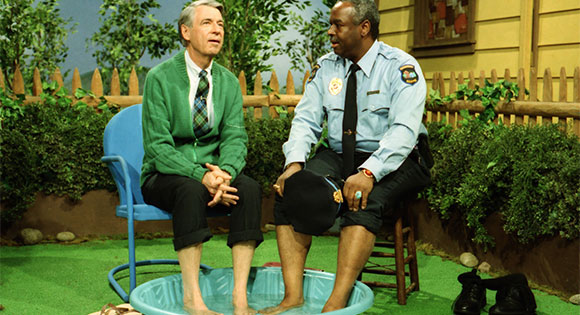 While most television companies and producers used children's programming to sell toys and make loyal consumers out of little boys and girls, Fred Rogers emphasized ways "to help children through some of the difficult modulations of life." One segment revolves around King Friday putting up a wall around his kingdom to ward off fears of change. You'll find this moment, and many others in the documentary, are links to our own times and the tensions between the haves and the have-nots. Rogers boldly presented his countercultural ideals and then came under attack in spoofs by comedian Eddie Murphy and other celebrities who mocked his generosity, gentle manner, and soft-spoken voice.

Rogers believed that adults have to spend more time developing their listening skills for interactions with youngsters. His secretary Elaine Lynch recalls that one script reference to putting a pet "to sleep" was dropped for fear that children would be worried about the idea of falling asleep themselves. This level of caring and attention to details gave the moral and ethical messages of the show more clout.

Watching the clips from Mister Rogers' Neighborhood, we noticed how the host kneels to talk with each child. It is just one example of the humility of this extraordinary communicator whose civility is something so desperately needed in our own times. A mentor of openness and goodness, Mister Rogers lived his own belief that "The only thing that really changes the world is when someone gets the idea that love can abound." 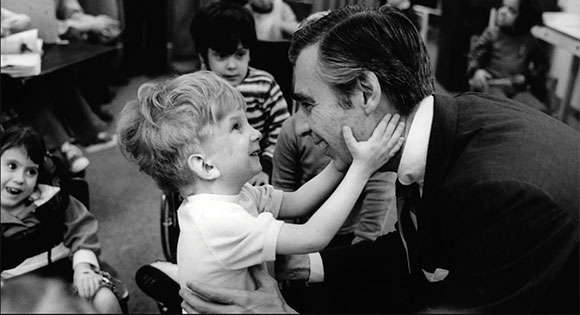 Watching his loving conversation with a boy in a wheelchair, we wept and recalled an eloquent quotation by the novelist Morris West. This sums up our feelings about this amazing documentary and its manifold meanings:

"The older I get, the more convinced I am that every human life is an evolutionary process during which the Creator offers to the creature an experience of divinity, an opportunity, great or small, to share in the ongoing act of creation."

PG-13 - some thematic elements and language

Book: You Are Special