Peterloo is an historical drama about the infamous massacre that took place on August 16, 1819, in St. Peter's Field near Manchester, England. An estimated 60,000 to 80,000 working class men, women and children had gathered to petition to give men the right to vote for their own representatives in Parliament. It was organized by local leaders in the Reformers movement. 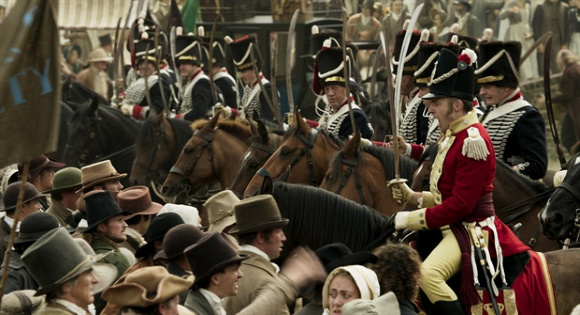 What happened at what became known as Peterloo (after Waterloo) was the result of years of feelings of superiority by the ruling class combined with hatred of anyone questioning them. Hearing word of dissent in the north of the country, the Home Secretary, Lord Sidmouth (Karl Johnson) and the Prime Minister, Lord Liverpoot (Robert Wilfort), take steps to quiet the poor and angry citizens. They dispatch General Sir John Byng (Alastair Mackenzie), just returned from the war against Napoleon, to command the troops in the area. They keep up with what's happening through a network of informants.

"Trace onto the face of the enemy the greed, hatred, carelessness you dare not claim as your own."
— Sam Keen in "To Create an Enemy"

Mike Leigh, the prolific English writer and director, quickly establishes that the conflict unfolding in England is as much about prejudice against the poor, greed for power, and determination to maintain the status quo as it is about the process of democracy. The bureaucrats are concerned that the people will turn against them, as they did in America; the Prince Regent (Tim McInnerny) worries that he is in danger of losing his head just like the French aristocrats during their revolution. Those in power project their own worst qualities upon the people of the north, while holding up their status as their moral superiors. 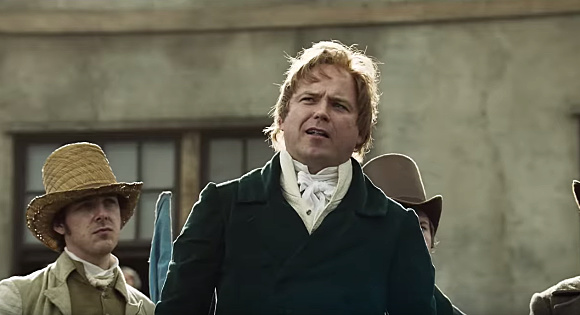 The reformers in the North, however, insist that they just want fair representation. They invite Henry Hunt (Rory Kinnear), an orator known for his passionate speeches about citizens' rights, to come to Manchester and address a gathering. The situation there is dire. Food and work are scarce, and hope is at a premium. Nelle (Maxine Peake), for example, trades her homemade pies for eggs in the market. She can barely gather enough food for her family at the same time that she is looking after her son Joseph (David Moost) who is suffering from shell shock from the Napoleonic Wars. 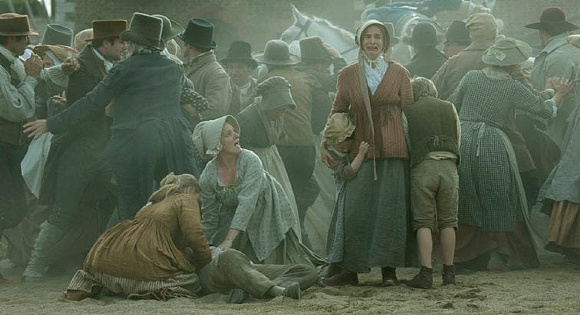 The day of the gathering, a huge crowd of men, women, and children greet Henry Hunt with cheers. But as soon as he starts speaking, the authorities send in the police on horseback, and then the British troops to break up the crowd. A riot of killing breaks out. At least 16 are killed and hundreds are injured.

In an interview in The Guardian, Leigh states:

"My films are about humanity and there's always love and warmth and humor and things that are sad and depressing as well. I've never made a film that is exclusively, relentlessly bleak and depressing." 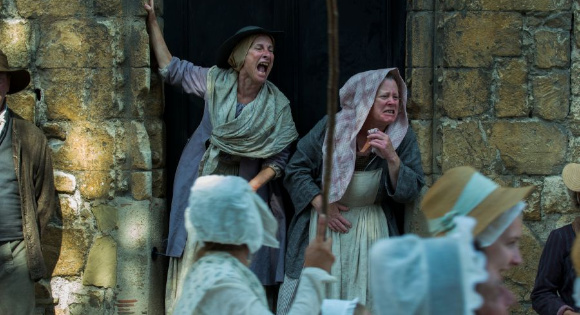 There are certainly moments of humanity here, in the scenes of family life, in the audience's responses to one of Hunt's speeches in London, and in the often humorous jockeying for position among those planning the gathering. But, make no mistake about it, this is an haunting and upsetting movie. It's not just the violence and the tragic ending. It's that again and again the working poor are described as nothing more than vermin. This is the kind of thinking that leads to genocide. The only spiritual antidotes are respect, the refusal to persecute others, and compassion.

"As things stand now, it may well be that the survival of the species will depend upon the capacity to foster a boundless talent for compassion. In the alchemy of a man's soul almost all noble attributes — courage, love, hope, faith, beauty, loyalty — can be transmuted into ruthlessness. Compassion alone stands apart."
— Eric Hoffer

PG-13 - sequence of violence and chaos