Directed by Dome Karukoski
An engaging biopicture that hints at the origins of the themes and style of The Lord of the Rings.

In the opening scenes of this engaging and enlightening biopicture of the author of The Lord of the Rings and other mythological classics, we see that he has a flair for the dramatic as he and his younger brother duel in the woods. Whereas other energetic and creative boys eventually gave up games of heroes and villains, John Ronald Reuel Tolkien (Harry Gilby) will go on to create a whole new cast of them and an imaginary world to boot!

He gets these interests from his widowed mother (Laura Donnelly). She tells him bedtime stories of dragons and knights on great quests. When she dies, the boys become the ward of a Catholic priest, Father Francis (Colm Meaney). He keeps his promise to their mother to get Tolkien into the best schools. There he proves to have a talent for making friends. He and three close schoolmates (Ty Tennant, Albie Marber, and Geoffrey Smith) form what he calls a "fellowship." Gathering regularly for tea, they encourage each other in their various interests in the arts. 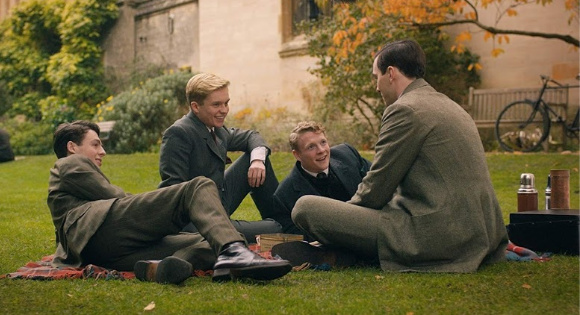 Living with other orphans in a boarding house, Tolkien (Nicholas Hoult) falls in love with Edith Bratt (Lily Collins), another resident. He has a gift for languages and has even made up one of his own. Edith shares his love of literature and encourages his unusual storytelling. But Father Francis tells him he must give up the relationship until he finishes school and comes of age; Tolkien is devastated but Edith, to his surprise, accepts this turn of events. Tolkien's education at Oxford is interrupted by World War I, and he is separated from his friends and Edith. (Scenes of the horrors of the front and Tolkien's dangerous search for his friend during the Battle of the Somme occur throughout the film.) 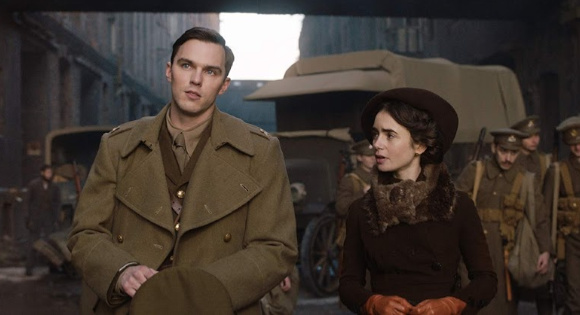 Fans of Tolkien's fantasy stories will no doubt look for clues in his life to explain the recurring themes in his stories and his writing style. During the World War I scenes, for example, figures of knights on horseback and strange beasts populate the smoky fields, and you wonder if such hallucinations gave birth to some of the creatures in Middle Earth. 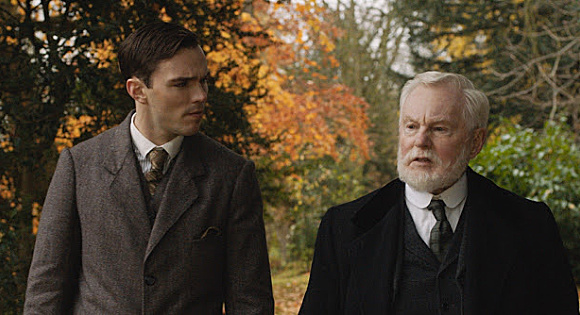 But for us, little conversational scenes are more telling. At Oxford, Tolkien meets a linguistics professor, Joseph Wright (Derek Jacobi) and the two of them discuss the magic and the mysteriousness of language. This echoes an earlier conversation with Edith, a pianist, about the beauty of words expressed in both sounds and meaning. Asked toward the end what he is writing, Tolkien describes his future work; the same could be said about this film:

"The world is indeed full of peril, and in it there are many dark places; but still there is much that is fair, and though in all lands love is now mingled with grief, it grows perhaps the greater."

PG-13 – some sequences of war violence