Directed by Jay Roach
A vigorous retelling of an unexpected #MeToo moment.

Megyn Kelly (Charlize Theron) wants to remind anyone who might think otherwise that she is not a feminist. The sharp-tongued, short-skirted, take-no-prisoners Fox News Anchor at the center of Jay Roach’s Bombshell might be one of the last women to be expected to add her voice in the #MeToo movement against sexual misconduct. But that’s exactly where Ms. Kelly finds herself, first by daring to question presidential hopeful Donald J. Trump’s blatant verbal attacks on women and then by refusing to support Fox News powerhouse Roger Ailes (John Lithgow) when anchor Gretchen Carlson (Nicole Kidman) accuses him of a history of abuses. 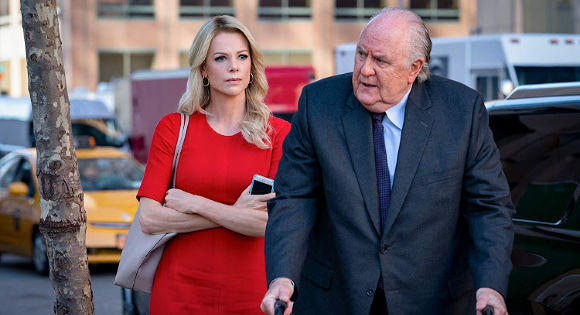 Bombshell’s most unique aspect is that it mostly takes place inside the walls of the infamous Fox News baseship. It’s no secret that the network’s conservative agenda has striven to support candidates like Trump, viewing itself as the last best hope against the rise of the “liberal agenda.” Roach’s film paints the interior of Fox’s headquarters as a dog-eat-dog fight to the death for anchors, assistants, and all involved. Ratings matter most, with workers chasing scintillating stories, and if they can’t find them, making them up. Everyone is at everyone else’s throat, but the women have an added layer to their competitiveness: They have to look good while they’re stabbing one another in the back. 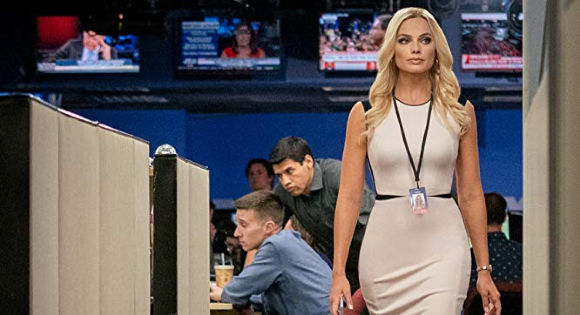 New to this environment is Jesus-focused millennial conservative Kayla Pospisil (Margot Robbie), admittedly a fictional character in this story based on true facts, but one who acts as a conglomeration of many women who have come forward to add their voices to the chorus of Ailes accusers. Her journey from wide-eyed newcomer to decked-out gameplayer, when placed beside Carlson’s “past her prime” exit and Kelly’s slow burnout, shapes a triptych highlighting the distinctions and intersections of the dehumanizing cycle of the female experience in the workplace: the dismissed veteran, the fast-rising and fast-falling star, and the glittery new vamp. As much as all three attempt to escape these pigeonholes, their shifting, untrusting eyes reveal that each is just as frightened of losing the spotlight as she is of speaking the truth.

The classically controversial, white, and privileged women of Fox News might seem like odd choices as the heroines of one of the first major films to stem from the powerful takedowns of the #MeToo movement, but Roach’s film, by staying focused on these white conservatives, reveals several complicated layers that make Bombshell stand out. When you’ve built your career on dismissing the “liberal agenda,” how do you harness its power when you need it? When you’ve played the game, giving in to the system that demands you to look, behave, and compete a certain way, how do you then demand that the rules be changed? These questions are not so much answered as they are constantly present in the narrowed eyes and acid asides of these complicated women. Bombshell sees Kelly, Carlson, and Pospisil as both victims and perpetrators, and invites its audience to allow both roles to exist at once. 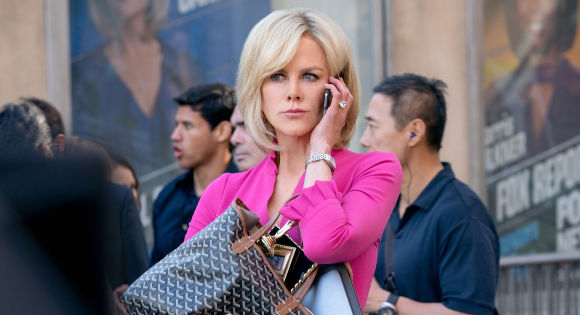 This tricky balance is aided by knockout performances. Across the board, Bombshell’s cast truly disappears into the lived experiences of every character, with Theron, Kidman, and Robbie dancing delicately between exhibiting true empathy for the women they portray and appreciating the nuances of how systems of unchecked power force women to participate in and even sustain those systems’ dirty business.

There are many other stories to be mined from the #MeToo movement, and the experiences of these complex conservatives at Fox News are only one very specific facet of this watershed time, but Bombshell is a dynamic conversation starter. Its production values and central characters might look slick and in control on the surface, but there is something seismic churning underneath, a call to something higher, poised to shake the foundations of even the most dominant culture-crafting behemoth.

R - sexual material and language throughout