Directed by Jan Comasa
A parabolic film that becomes a fiery interrogation of the limits of communal and individual transformation.

Perennial themes of forgiveness and grace course throughout the entirety of Jan Comasa’s Corpus Christi, but even these much-explored topics feel fresh (sometimes downright shocking) when framed by the film’s curiously combustible point of view. What might have wound up a saccharine redemption story instead becomes a grittily authentic exploration of the limits of the human will to change, to give over to sacred metanoia, and to embody true empathy. The ways that the body of Christ has been and continues to be abused by “believers” is well-trodden ground, but our insidious cycles of self-deceiving apostasy have never quite felt so pure or raw as they do here. 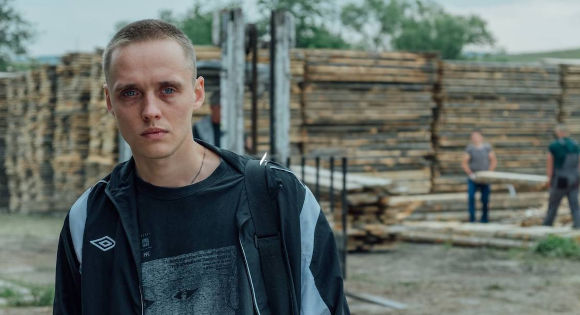 Based on real events and adapted by Mateusz Pacewicz, this parabolic howl of a film begins in a youth detention center, where 20-year-old Daniel (Bartosz Bielenia) has enjoyed an awakening due to his interactions with the prison’s priest Father Tomasz (Lukasz Simlat). In fact, Daniel is so moved that he has decided, as his impending release draws near, to pursue the priesthood himself. But when Father Tomasz tells him that it will be impossible for him to be ordained due to his criminal record, Daniel quickly gives up, spending his first hours of freedom engaging in a flurry of drugs, alcohol, and sex, before he ships off to a remote village to work anonymously in a saw mill.

Things take a turn when Daniel stops inside the local village church, is immediately mistaken for a clergyman by a young woman (Eliza Rycembel), and is taken to meet the village’s aging vicar (Zdzislaw Wardejn) who is suffering from debilitating health problems. Before Daniel realizes the true gravity of what he’s actually doing, he’s told the vicar that he is a traveling priest and the vicar has arranged for Daniel to fill in for him while he’s away for medical treatment. 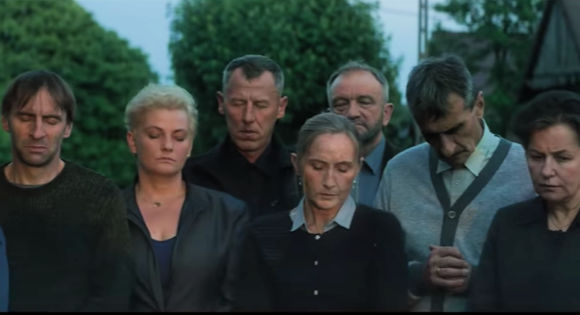 From there, surprises unfold, some of them heartwarming, most of them heartbreaking. Early on, the mistaken identity aspect of Daniel’s story seems ripe for a more farcical tone, but as he learns that the village is drowning in grief over a car crash that killed several of its cherished young people in one night, Daniel’s journey with his flock becomes a serious study of a collective dark night of the soul, one that feels horrifying and endless, threatening to never give way to the light of dawn.

All of this might sound like a downer, but Corpus Christi never feels somber; it instead often feels volatile. The grieving villagers don’t wallow in self-pity; they wail in rage. They don’t wonder about their own guilt; they have found convenient receptacles for their blame, namely the driver of the other car involved in the head-on collision, who also died but whose widow (Barbara Kurzaj) these stunted adults torment with crude graffiti and cruel letters. In a more Hollywood-ending project, Daniel’s attempts to show these self-defeating mourners a different way might lead to triumph, but Comasa is intent on showing how even the most well-meaning faith leaders are often working against an insidiously human penchant for destruction, and that not everyone can be saved from the allure of the downward spiral. 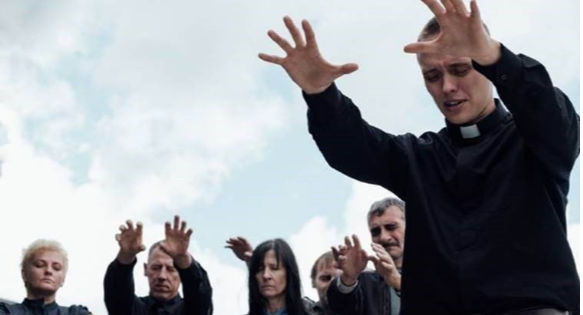 Deception is a clear theme when it comes to Daniel’s clergy-collared playacting, but it also runs through all of the film’s finely etched characterizations. All the parents who have lost children, including the quietly judgmental caretaker of the church, Lidia (Aleksandra Konieczna), are deceiving themselves, looking for any skewed excuse to continue to feed their anger and rarely challenging themselves to follow the scriptural imperatives they wanly ingest on Sunday mornings. As Daniel attempts to nudge them toward a communal change of heart, his pious performance actually becomes his actual life, his simple donning of the priest collar shifts to an embodiment of true moral leadership. But the shadow of his own deception continues to needle him, from within and without. Even as Daniel tries to give his parishioners more of a future, it’s only so long before his past catches up with him.

Corpus Christi’s final moments are brutal, and they will disturb more sensitive souls who desire a clean trajectory for both Daniel’s redemption and collective redemption for the village’s inhabitants. But the wounds on the body of Christ, once it’s been abused for so long, are not so easily healed. The work of forgiveness, grace, self-reflection, and repentance often ends up abandoned and botched. Corpus Christi leaves us with a harrowing question that has been boiling beneath even its quietest moments: When we are held to the fire and our masks are burned off, will we have the courage to bare our souls and do the difficult work of real spiritual transformation, side-by-side, or will we simply slip back into our cycles of violence, both physical and psychological, and go down in flames together?